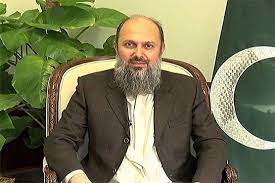 Jam Kamal has stepped down as Balochistan chief minister a day before the provincial assembly was to vote on the no-confidence motion tabled against him.

His resignation was was confirmed by Spokesperson of Governor Balochistan Zahoor Agha, saying the governor had accepted the resignation.

Jam Kamal Alyani Sunday evening tweeted that he would “rather leave respectfully and not be part of [his opponets’] monetary agenda and bad governance formulation.”

“Beside many deliberate political hindrances, I have given my utmost time and energy for the overall governance and development of Balochistan,” he said.

Hours before stepping down, Jam Kamal urged Prime Minister Imran Khan to restrain federal cabinet members from muddling in the affairs of the provincial government. He accused on Sunday members of the federal cabinet of interfering in provincial matters.

Pakistan Tehrik-e-Insaf, the Balochistan chief minister said in a tweet, should allow its provincial leadership to act responsibly.

“Our movement will usher in a new era of politics not only in Balochistan but for all of Pakistan,” Jam Kamal said.

He said that the crisis had revealed the truth about several people. “People of high integrity and impeccable credentials turned out to be greedy, power hungry and conspiring.”

According to him, he had handed over all his powers to members of BAP and allies. “I believe they will make better decisions to overcome the current political crisis,” Jam Kamal said.

If PDM formed a new government, he said: “We will sit on opposition benches. We know who is guiding our opponents. All past opponents are now on the same side.”

Praising the actions undertaken by security agencies, Jam Kamal said that action in the difficult terrain of Jambro mountains showed the stability and strength of the security forces.

“Despite the level of political fragmentation, many many people are still fulfilling their responsibilities and also risking their lives for protecting the motherland,” Jam Kamal said in another tweet.