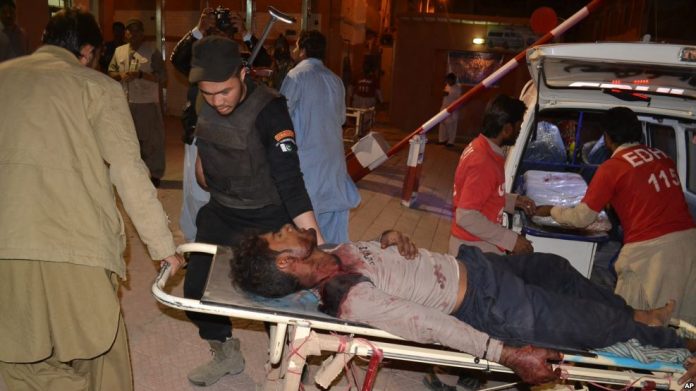 QUETTA: The Balochistan government has announced a three-day mourning for those who lost their lives in Monday night’s terrorist attack on Quetta police training center.
At least 60 people were killed and dozens more wounded when militants wearing suicide vests stormed a police academy near Quetta in Balochistan overnight.
Two of three heavily-armed militants, in one of the deadliest extremist attacks this year, blew themselves up while a third one was killed in operation before they opened indiscriminate fire on police cadets, leaving at least 120 injured.
The three terrorists burst into the sprawling academy, targeting sleeping quarters that are home to some 700 recruits, sending terrified young men fleeing.
Around 250 cadets were held hostage by the attackers. They were freed following an army operation during which gunfire continued to ring out at the site for several hours.
Prime Minister Nawaz Sharif has postponed all of his engagements in Islamabad and decided to pay a visit to Quetta.
Chief of Army Staff General Raheel Sharif arrived in Quetta. He was accompanied by the Director General ISI and the Director General Military Intelligence.