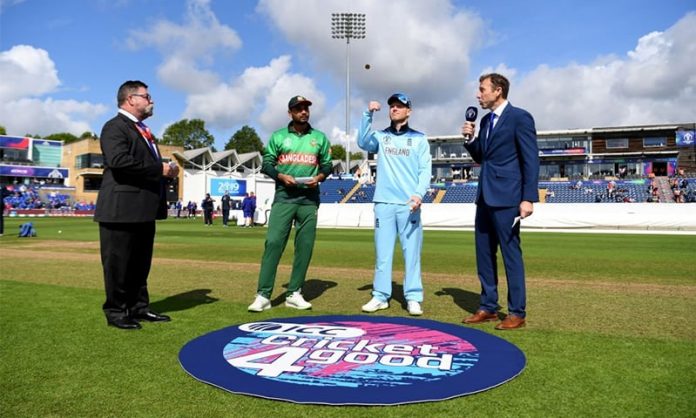 CARDIFF: Bangladesh won the toss and chose to field in their World Cup match against England at Cardiff on Saturday.
After the Pakistan-Sri Lanka match was washed out on Friday without a ball being bowled, conditions in the Welsh capital are dry but gusty.
Speaking after the toss, Bangladesh skipper Mashrafe Mortaza said: “The pitch has been undercover for the last two days, so hopefully there’s something in the first hour. Playing an extra quick might be helpful in these conditions.”
England skipper Eoin Morgan was not so bothered about loosing the toss.
“It’s not a bad toss to lose, once the grass comes off the wicket [the condition] will stay the same all day,” he said.
England’s Moeen Ali will be missing out on today’s match, reportedly because of the birth of his child, which is expected soon. Liam Plunkett will be playing in his place.
Bangladesh have not made any changes in the team since their match against the Black Caps.
Both teams are looking to bounce back from previous losses; Bangladesh lost against New Zealand on Thursday while hosts England were defeated by Pakistan on Monday.
England, who are the favourites this tournament, would be in early trouble in case of another defeat.
Bangladesh have beaten the English at the last two World Cups, with the loss at the 2015 World Cup eliminating them in the group stage.
Teams
Bangladesh: Tamim Iqbal, Soumya Sarkar, Shakib Al Hasan, Mushfiqur Rahim (wk), Mohammad Mithun, Mahmudullah, Mosaddek Hossain, Mohammad Saifuddin, Mehidy Hasan, Mashrafe Mortaza (c), Mustafizur Rahman
England: Jason Roy, Jonny Bairstow, Joe Root, Eoin Morgan (capt), Ben Stokes, Jos Buttler (wk), Chris Woakes, Adil Rashid, Liam Plunkett, Jofra Archer, Mark Wood