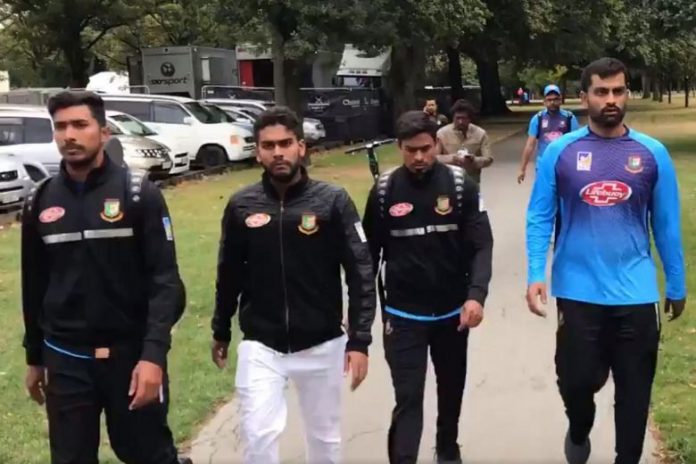 CHRISTCHURCH: Bangladesh s cricket team escaped unscathed after a shooting at a mosque in central Christchurch, an official told foreign news agency on Friday.
Bangladesh Cricket Board spokesman Jalal Yunus said most of the team were bussed to the mosque and were about to go inside when the incident happened.
“They are safe. But they are mentally shocked. We have asked the team to stay confined in the hotel,” he said.
Player Tamim Iqbal tweeted that it was a “frightening experience” and that there were “active shooters”.
“Entire team got saved from active shooters!!!” tweeted Tamim Iqbal. “Frightening experience and please keep us in your prayers.”
Local media said there were multiple casualties at one mosque and that another had been evacuated.
Earlier, armed police in New Zealand swarmed central Christchurch Friday amid a shooting at a mosque in the South Island city.
“A serious and evolving situation is occurring in Christchurch with an active shooter,” police said in a statement. “Police are responding with its full capability to manage the situation, but the risk environment remains extremely high.”
Local media said there were multiple casualties at one mosque and said another had been evacuated, and there were reports that members of the Bangladesh cricket team were also present at one site.
Police commissioner Mike Bush said all schools in the city had been placed in lockdown in response to “a serious ongoing firearms incident”.
“Police urge anyone in central Christchurch to stay off the streets and report any suspicious behaviour,” he said in a statement.
An eyewitness told Radio New Zealand he heard shots fired and four people were lying on the ground, with “blood everywhere”.
There was no official information on casualties but the New Zealand Herald said at least one person was killed.
ESPN Cricinfo reporter Mohammed Isam said members of the Bangladesh cricket team, who are due to play a Test match in Christchurch tomorrow escaped from the mosque.
“They ran back through Hagley Park back to the Oval,” he tweeted.