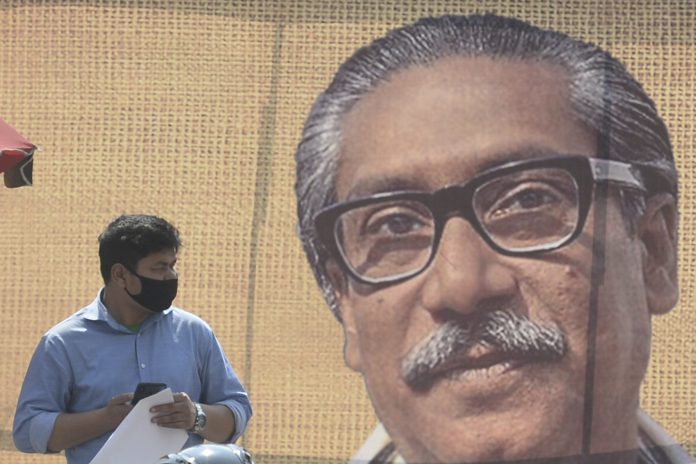 DHAKA: Bangladesh has executed a military captain less than a week after he was arrested after nearly 25 years on the run over the assassination of the country’s founding leader, a minister said Sunday.
Sheikh Mujibur Rahman, father of current Prime Minister Sheikh Hasina, was killed along with most of his family in a military coup on August 15, 1975, nearly four years after he led Bangladesh to independence.
In 1998 Abdul Majed was sentenced in absentia to death along with a dozen other army officers over the murders.
Bangladesh’s Supreme Court upheld the verdict in 2009 and five of the killers were executed several months later.
On Tuesday, counter-terrorism police officers arrested Majed as he rode a rickshaw in the capital early in the morning.
Bangladesh prison authorities carried out Majed’s execution by hanging days later, after the country’s president rejected a mercy plea from the convicted killer.
“He was hanged to death at 12.01 am Sunday (1801GMT),” law minister Anisul Huq told foreign news agency, adding the execution took place at the country’s largest prison, just outside the capital Dhaka.
Majed is believed to have fled to India in 1996. He returned to Bangladesh last month.
Majed’s wife met him at the prison one last time on Saturday evening when the prison authorities had scheduled his execution.
Security has been tightened at the areas outside the prison at Keraniganj town, with scores of policemen patrolling the jailgate, police chief of Dhaka district Maruf Hossain Sorder told foreign news agency.
Prime Minister Hasina, whose public celebrations this year for the centenary of her father’s birth have been hampered by the coronavirus pandemic, was in Europe with her sister at the time of the 1975 attack.
In a video message, the country’s home minister this week called Majed’s arrest “the best gift of Mujib centenary year”.
The road to getting justice for the 1975 assassination was long, and the killing continues to poison Bangladesh’s murky political scene to this day.
Successive post-coup military governments rewarded the killers with diplomatic positions and several of them were even allowed to form a political party and contest polls in the 1980s.
For 21 years, an indemnity law enacted by the post-coup government prevented a prosecution of the killers. This was only overturned after Hasina came to power in 1996.
Hasina has also long accused Ziaur Rahman, president from 1977 until his assassination in 1981, of orchestrating her father’s murder.
This is denied by his widow Khaleda Zia, prime minister from 1991-1996 and 2001-2006 and Hasina’s former ally turned arch enemy who was convicted of graft in 2018, charges she said were fabricated. …Agencies