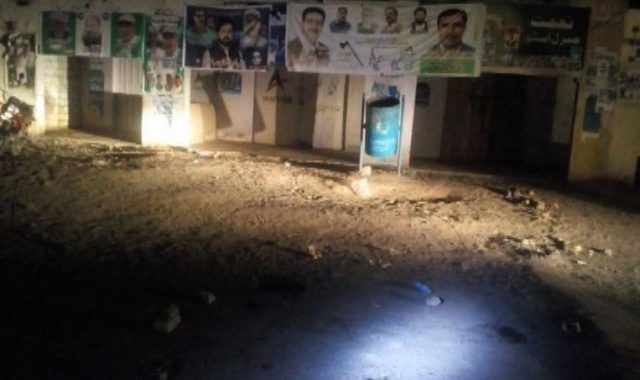 QUETTA: At least 20 people including Balochistan Awami Party (BAP) candidate – Sakhi Amanullah – were injured in a grenade attack on BAP’s election office in Dalbadin city of Chaghi district of Balochistan.
The blast is the latest in a number of attacks targeting politicians campaigning ahead of July 25 general elections in Pakistan.
Unknown attackers threw hang grenades near the party’s office in Dalbandin city of Chaghi, the headquarters of Balochistan’s largest district, Chaghi, police said.
The blast at BAP’s crowded election office left more than 20 workers injured. They were rushed to civil hospital Chaghi by police and rescue workers.
Reports said four of critically injured people were referred to Quetta civil hospital.
The bombing is the latest in a number of attacks targeting politicians campaigning ahead of the national polls on July 25.
A suicide blast in Balochistan on July 13 killed 149 people – one of Pakistan s worst-ever terror attacks – underscoring continuing security challenges in the country following years of dramatic improvements.
Violence in Pakistan has dropped significantly in recent years as a result of intensified military operations against militants in the tribal areas bordering Afghanistan.
The military has warned of threats ahead of the polls, and said it will deploy more than 370,000 soldiers for security on election day.