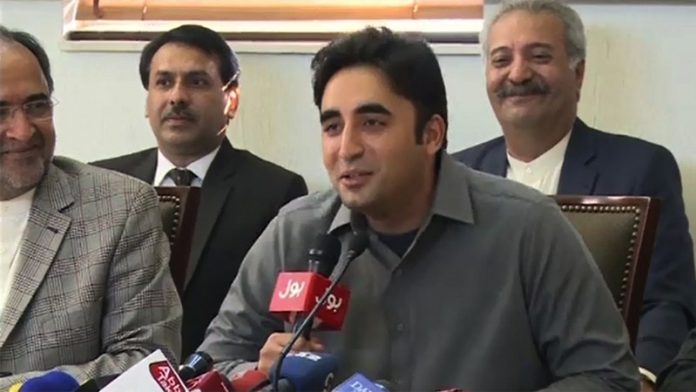 KARACHI: Pakistan Peoples Party (PPP) Chairman Bilawal Bhutto Zardari on Thursday has said that former President Asif Ali Zardari and ex-Prime Minister Nawaz Sharif are being subjected to political revenge in the name of accountability.
The PPP chairman said that PM Imran Khan possesses no humanity and that the incumbent government of Pakistan Tehreek-e-Insaf (PTI) will be responsible if anything happens to Nawaz and Zardari.
Earlier, while addressing a rally in Tharparkar, Bilawal Bhutto alleged that the federal government wants to end the rights of provinces and take over Karachi which he will not let happen. “Democratic and economic rights are under attack”, he said.
The scion of Bhutto dynasty asserted, “We all will get rid of this puppet government together and form a public government”.
He went on to say that puppet government and political orphans make fun of your poverty. “They have destroyed the economy while deal on Kashmir has also been made”, he maintained.
Bilawal further announced that the next protest will take place on October 26 at the border of Sindh and Punjab.
PPP Chairman said that they will save Pakistan by sending off the selected rulers and help the public by snatching their rights back from the federal government.