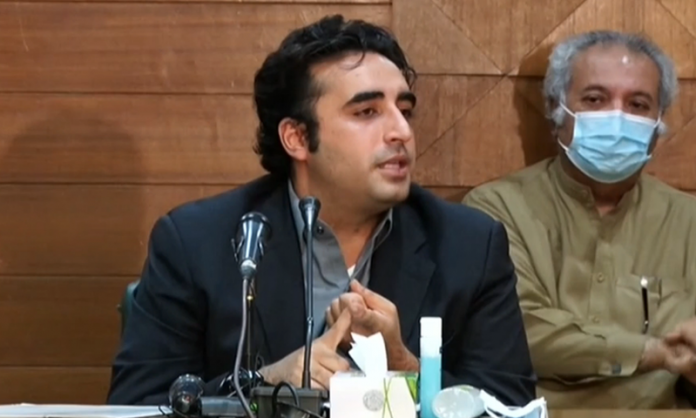 LAHORE: Pakistan People’s Party (PPP) Chairman Bilawal Zardari has accused the incumbent government of wanting to kill his father, former President Asif Ali Zardari.
Bilawal Bhutto was addressing a press conference in Lahore, where he once again challenged Prime Minister Imran Khan for a debate either in the parliament or on TV.
Bilawal Bhutto said that contrary to the impression given by PTI ministers, PPP leaders do not want any concession or any NRO, adding that the party will continue to give a “tough time” to the government.
“PM Imran is so brave that he makes a speech in our absence,” said Bilawal, adding “Imran Khan is a PM for PTI’s social media only”.
“Imran Khan is not willing to come in front of us,” said the PPP chairman, adding that the prime minister is the first leader to have failed in evolving national consensus regarding the Kashmir issue.
“If Osama Bin Laden is a martyr then what is your stance on Zarb-e-Azb (operation), Swat Operation, and the APS attack?” he said.
The PPP chairman said that Pakistan needs a mature prime minister, who can tackle its problems.
Bilawal said the coronavirus pandemic is not subsiding in Pakistan as being claimed by the government.
“The government has not taken any step to deal with the coronavirus (pandemic),” he said, adding that the healthcare workers in Punjab should get risk allowance.
The prime minister has not met with doctors or the medical staff, he has only met the rich people, said Bilawal.
He said that Pakistan is facing unprecedented challenges but it can be seen in the budget that education, health and unemployment have not been given any priority.
Bilawal Bhutto said that the opposition parties are not talking about the ‘minus-one’ formula but PM Imran himself brought up the subject.
He said that whenever democracy faced threats, PPP played a vital role in its preservation.
“According to the Auditor General’s report, within a year corruption worth Rs270 billion was done,” said Bilawal adding the PM should provide accountability in this regard.
“The sugar commission was also an NRO, which was given to Buzdar, Tareen and Asad Umar,” he said.
Bilawal said that the government’s each policy seems to be based on the principle of NRO.
He said that the PTI-led government is exacerbating the crises as it has failed to deal with them in an appropriate manner.
Speaking on the plane crash and recent debacle regarding the credentials of pilots, Bilawal said the government turned the crash into an excuse to privatise the national airline.
“Our pilots are known for their expertise around the world.”
Bilawal Bhutto said that the entire country is proud of Sindh police for thwarting the Pakistan Stock Exchange attack, in which four terrorists were killed.
“Policeman Rafique Soomro from Umerkot killed two terrorists,” said Bilawal, adding that timely action from Sindh police saved the nation from catastrophic damage.
He said that Pakistan’s economy improved due to the sacrifices rendered by police and Rangers personnel.