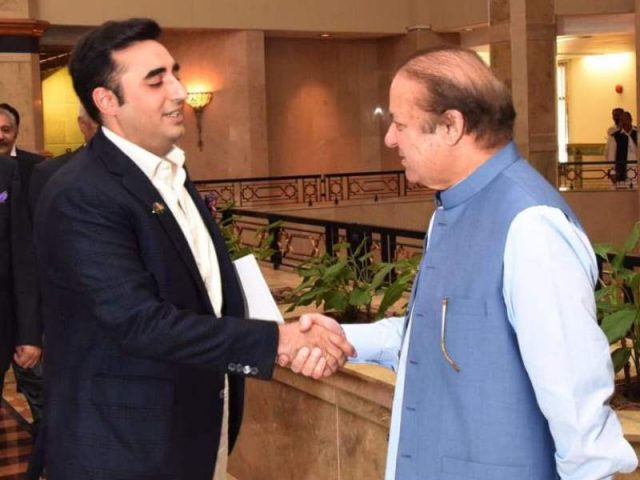 LAHORE: Pakistan People’s Party (PPP) chairman Bilawal Bhutto Zardari is scheduled to meet detained Pakistan Muslim League-Nawaz (PML-N) supremo and former premier Nawaz Sharif at the Kot Lakhpat Jail, Lahore today (Monday).
Bilawal Bhutto had sent a request to the Punjab home department seeking permission to meet Nawaz Sharif to inquire about his health. Sources said that some senior PPP leaders will also accompany Bilawal Bhutto.
Senior PPP leader Qamar Zaman Kaira on Sunday confirmed that Bilawal Bhutto would also discuss the present political situation in the country with Nawaz Sharif during the meeting.
On Saturday, the Punjab home department approved the PPP scion’s request to meet the former prime minister Nawaz Sharif at the Kot Lakhpat Jail in Lahore. They are expected to meet on Monday. PPP Central Punjab President Qamar Zaman Kaira, Senator Mustafa Khokhar and Bilawal’s political secretary Jameel Soomro will accompany him.
Bilawal and his father Asif Zardari have already expressed their reservations regarding Nawaz’s health and the treatment he is getting in jail.
The former prime minister has been suffering from a heart disease.
Maryam Nawaz Sharif recently said her father has refused to get treatment for his medical condition.
Senior journalist Mazhar Abbas says Bilawal Bhutto would meet Nawaz Sharif in a bid to pursue him to get immediate medical treatment
Maryam Nawaz had demanded the authorities provide medical care to her father inside the jail.
Bilawal Bhutto Zardari recently urged government treat Nawaz Sharif’s illness seriously and provide proper medical care.
“Appalled to hear of the callous and inhumane treatment of imprisoned former PM Nawaz Sharif by the government. His illness should be treated seriously, be provided with proper medical care and treated with respect,” he wrote on Twitter on March 7.