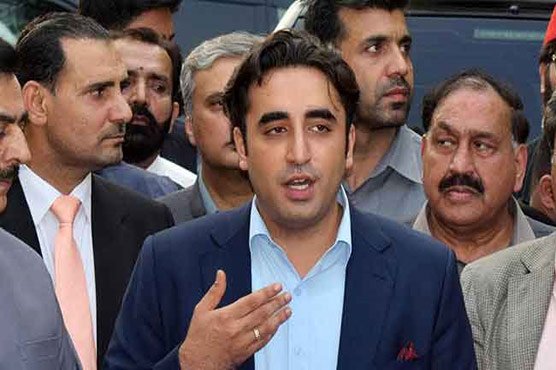 ISLAMABAD: Pakistan Peoples Party (PPP) Chairman Bilawal Bhutto has urged the government to terminate its agreement with the International Monetary Fund (IMF) and re-negotiate the terms.
Talking to media representatives outside the Parliament, Bilawal once again lambasted the government‘s economic policies and said that the people were waiting for relief, but instead the rulers increased the prices of essential commodities. He added that the current leadership can neither run the government nor handle the economy whereas they get personal when they cannot tolerate the criticism for their miserable failure.

Also read: Govt taking steps for economic stability in country: Hafeez Shaik
The scion of Bhutto dynasty called Adviser to Prime Minister on Finance and Revenue Dr Abdul Hafeez Shaikh a representative of the IMF, saying that who will respond to the poor people if the government does not talk about the facts. “We do not accept the attack on the democratic rights of the people,” he added.
He continued saying that they respect Hafeez Shaikh but he is not an elected authority and people of Pakistan are not happy with him.
He accused the incumbent leadership of bargaining on the rights of the poor. He called the government to tear up the agreement with the global body, expressing that the agreement did not protect the rights of the masses.
On Feb 11, Pakistan Peoples Party (PPP) Chairman Bilawal Bhutto urged the incumbent government to either provide relief or go home as they will not tolerate anymore economic slaughtering of the people.
Addressing the National Assembly (NA) session, he termed the Parliament as powerless, expressing that inflation is being discussed in the House but Finance Advisor is not present.
He further said that PM Imran used to say that the people of Pakistan do not pay taxes because the leaders were dishonest. He asserted that the incumbent government, itself, mentioned that there is a shortfall of Rs700 billion of taxes. “Is the PM now honest or incompetent? Is the reason same for not receiving taxes now? PM Imran should answer which of his corruptions is causing inflation”, he emphasized.
The scion of Bhutto dynasty expressed that the Bureau of Statistics stated that the inflation which has been witnessed in the past year has never been seen before, even in the last 10 years; while the food commodities has inflated by 78%. He slammed the government for turning the “floundering economy into a sinking economy”.
Meanwhile, Bilawal Bhutto Zardari said that this government is sabotaging the Benazir Income Support Programme (BISP), which was initiated by his late mother and former premier Benazir Bhutto. He termed the programme as the first social security net for the people, saying that the whole politics of Benazir Bhutto was for the people of Pakistan.
He added: “Only those who came into power without even getting elected are saying that there is no inflation and the economy is growing.
“PM Imran used to say that he would not borrow any loan and rather commit suicide whereas, his own State Bank of Pakistan (SBP) mentioned that he has debts of Rs11,000 billion.
“We do not want PM Imran to commit suicide, but we demand that he acknowledges he is incompetent and selected”.