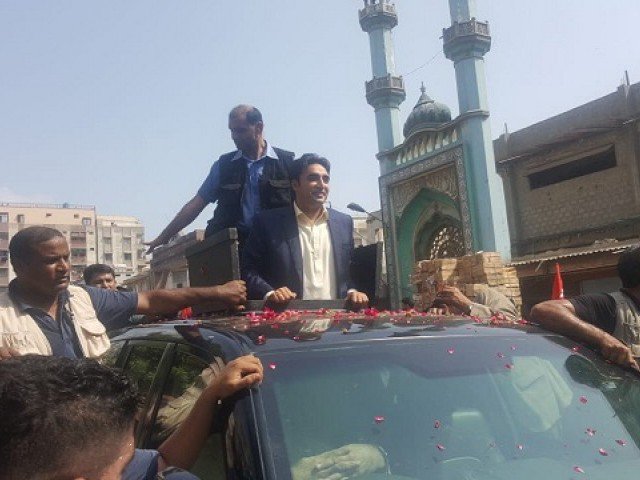 HYDERABAD: Pakistan Peoples’ Party (PPP) chairman Bilawal Bhutto Zardari on Tuesday said that the Chief Justice of Pakistan Justice Saqib Nisar’s visit to hospital in Rawalpindi along with Sheikh Rashid was not appropriate and urged all the state institutions to work within the constitutional ambit.
While addressing party workers in Hyderabad, Bilawal reaffirmed his commitment to address the issues facing people of Karachi.
The PPP chairman acknowledged that there were plenty of problems that needed to be resolved but the work carried out by former chief ministers Qaim Ali Shah and Murad Ali Shah was unprecedented in the province.
He said the mafias that ruled Karachi for years now stand exposed after their infighting.
Answering a question regarding the water scarcity, he said the PPP was committed to resolve the issue and it has installed hundreds of Reversed Osmosis (RO) plants.
Responding to a question regarding an anti-PPP alliance in Sindh, he said it was a puppet alliance which his party has long been facing.
Answering a question regarding the speculations that a hung parliament was in the making, the PPP chairman said the possibility of such an election could not be ruled out. He also hinted at forming coalition government.
Bilawal said that candidates are being forced into defecting PPP. He said Sharif family spent huge national money in Raiwind. Grand Democratic Alliance (GDA)-Muttahida Qaumi Movement-Pakistan (MQM-P) is a puppet alliance, he added.
PPP chairman further said that threats are being hurled at PPP candidates.