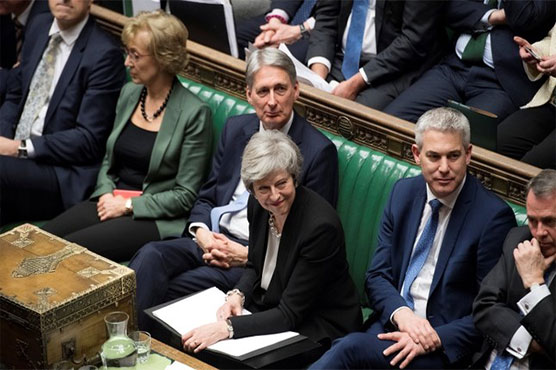 LONDON: British Prime Minister Theresa May won parliament s backing on Tuesday to renegotiate her Brexit deal — a major policy reversal that sets up a new standoff with the EU after it ruled out any change.
May s dramatic decision to abandon a pact she herself sealed with the 27 EU leaders at a summit last month came with Britain on course to crash out of the bloc after 46 years in a blaze of political and economic chaos on March 29.
The pound quickly fell on fears of a no-deal scenario as MPs voted through an amendment saying they would only support a divorce deal if its controversial “backstop” clause to keep the Irish border open was removed.
A spokesman for EU leader Donald Tusk said the deal was “not open for renegotiation” while French President Emmanuel Macron said it was the “best agreement possible”.
MPs also voted in favour of a non-binding measure that “rejects the United Kingdom leaving the European Union without a Withdrawal Agreement”.
But they failed to vote through a more important plan — backed by European supporters — that would have tried to force through a Brexit delay if no new deal with the EU emerged by February 26.
May now faces a formidable challenge convincing Brussels to re-open talks that took 18 excruciating months to conclude.
She said parliament s approval of the backstop amendment gave her the “mandate” to “seek to obtain legally binding changes to the withdrawal agreement”.
But she conceded that there was “limited appetite” in the EU for renegotiation.
“It won t be easy,” said May. “But in contrast to a fortnight ago, this house has made it clear what it needs to approve the withdrawal agreement.”
Parliament on January 15 voted against the draft deal by a crushing margin.
That significantly raised the risk that Britain s departure without a plan on March 29 will create trade and economic disruptions on both sides of the Channel.
Brexit hardliners from May s Conservative party think the backstop — created to keep the border open with Ireland — could see Britain indefinitely tied to EU trade rules.
The winning amendment calls for the backstop to be replaced with “alternative arrangements to avoid a hard border” — vague wording that did not pin May to any specific approach.
Yet analysts struggled to see how May could convince her EU counterparts to agree to any changes.
“The only strategy I can see behind all this is the prime minister uses this to finally prove to all but her most recalcitrant backbenchers that the backstop cannot be renegotiated,” King s College London professor Anand Menon said.
“She is going to have to come back definitely and say this deal isn t on offer,” Menon said.
University College London professor Morten Ravn agreed that May appeared to be playing for time.
“May won support for an amendment that she probably expects she cannot deliver on in the hope that parliament will support her deal last minute in order to avoid no-deal Brexit,” Ravn told AFP.
May promised to give MPs a chance to vote on what happens next on February 14 should she fail to win a new agreement over the course of the next two weeks.
May already tried and failed to wrest new concessions from Brussels during a difficult summit last month that exposed her weak negotiating position — and the European Union s resolve.
EU Brexit negotiator Michel Barnier s deputy Sabine Weyand on Monday remarked that the current political debate in Britain felt “like Groundhog Day”.
She said Britain risked crashing out of the EU without a deal “by accident” because London cannot decide what it wants.
Following Tuesday s votes, Irish foreign minister Simon Coveney said the he hoped the backstop would “never be used” or replaced quickly by a new trade agreement.
“But it is necessary and tonight s developments at Westminster do nothing to change this,” Coveney tweeted. …Agencies