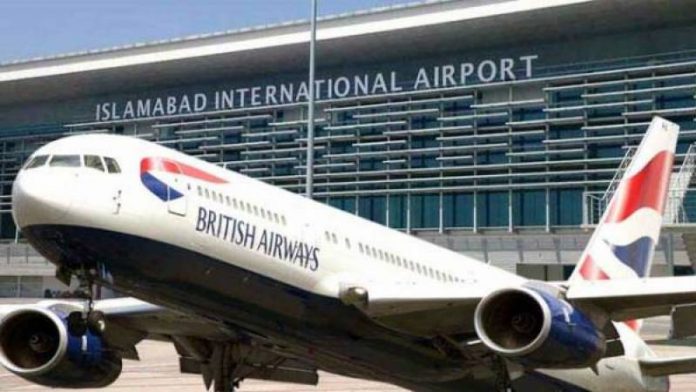 LONDON: First flight of British Airways to Pakistan landed at New Islamabad Airport on Monday, more than a decade after suspending the route following a deadly bomb blast.
The carrier pulled out of the country after the attack at Islamabad’s Marriott Hotel in September 2008, which left at least 54 people dead and many more injured, including six British citizens. It will be the only Western airline to serve Pakistan when flights between London Heathrow and Islamabad resumed on Sunday night.
The three-flights-per-week service will be operated with Boeing 787 Dreamliner aircraft and will serve the Pakistani capital’s main international airport. British Airways said it will offer “bespoke services” including a halal meal option in every class of cabin and ensuring sauces used in meals do not include alcohol or pork.
It revealed there has been “considerable interest” from its Urdu-speaking Pakistani and British Pakistani cabin crew to work on the flights. Andrew Brem, chief commercial officer at British Airways, said: “The anticipation from customers and colleagues has been palpable and we hope customers in both the UK and Pakistan will enjoy the classically British service we offer, with thoughtful bespoke touches.”
Aftab Khan, who speaks English and Urdu, is one of the crew operating the inaugural flight, which is due to depart London at 9.15pm. He said: “I can’t wait for what will be such a wonderful occasion. To be chosen to operate this flight, with my close family links to Pakistan, is a real honour. I know that my colleagues operating the flight are just as excited.”
When the resumption of flights was announced in December last year, British High Commissioner to Pakistan Thomas Drew said British Airways was joining an “increasing number of British companies doing business in Pakistan”.
He added: “The links between Britain and Pakistan are already extraordinary, from culture and cricket to people, politics and education.”