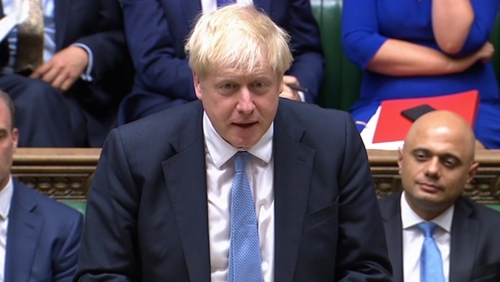 LONDON: British Prime Minister Boris Johnson has been urged to end his silence on the issue of Indian Occupied Kashmir and speak out against India’s unconstitutional attack on Kashmir’s autonomy through Article 370.
At a meeting in the House of Commons here, MPs, academics and campaigners called on the British prime minister to take notice of the grim human rights situation in Occupied Kashmir. Millions of Kashmiris have been put under inhuman conditions by the occupying Indian army, who have cut off their communications, and subjected them to prevention of food and supplies and rape and torture of Kashmiri women.
MPs Khalid Mahmood, John Spellar, and Dr Afzal Ashraf from the University of Nottingham addressed the audience to discuss the implications of Indian PM Narendra Modi’s actions and the way forward. Zeeshan Shah, a businessperson and community leader, arranged the meeting.
Labour MP Kahlid Mahmood said the whole world was alarmed at Modi stripping Kashmir of its autonomous status with the revocation of Article 370 of the Indian constitution. “This is a direct attack on the political status of Kashmir and its right to self-governance by Narendra Modi. This will have far-reaching and dangerous consequences for the region. Britain is a party to the dispute of Kashmir and it is unfortunate that the British prime minister has chosen to stay silent and do nothing. The PM must pick up courage and stand by the right side of history and help the people of Kashmir to get the right of self-determination,” he said.
John Spellar MP called on the United Nations to take action against India after revocation of Article 370. He said Kashmir has become the biggest human rights issue at the present time as a whole nation of millions of people was caged up to live like animals. He said Modi had cut off Kashmiris from the rest of the world to implement his agenda. He added that media reports that the Indian army used cluster bombs on civilians were worrying and should not go unnoticed and unchecked. He further said that use of cluster ammunition amounted to a clear violation of the Geneva Conventions and of international humanitarian law. It is a moral obligation of everyone to intervene and stand by the people of Kashmir, the MP added.
Zeeshan Shah said that repeal of Article 370 had further inflamed the already worsening situation in the region that is home to over seven million people. He said those speaking in favour of Kashmir were not against India or Indian people but against policies which discriminated against people on the basis of their religion, origin, and colour. He said human rights should be held supreme by all nations. Shah said that the people of Kashmir should be given the right to decide their future and forcibly annexing them to India would not solve the crisis but further perpetuate it.
Dr Afzal Ashraf called on the United Nations to do everything in its power to de-escalate this extremely troubling and tense situation in occupied Kashmir. He said India is mistaken to believe that it can suppress the freedom movement of Kashmir by use of force and illegal means. He said the Indian government should show seriousness towards resolving the issue of Kashmir otherwise the region would continue to face instability and chaos.
The meeting discussed the way forward and agreed that foreign affairs select committee would be approached, letters would be written to parliamentarians, the government, and international bodies to expose the actions of India in occupied Kashmir. It was also agreed that the matter would be raised in the British parliament.