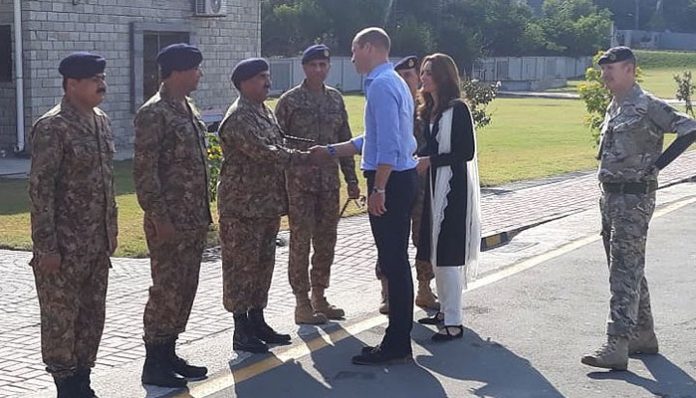 ISLAMABAD: Britain’s Duke and Duchess of Cambridge arrived back in Islamabad Friday after spending an unexpected night in Lahore when thunderstorms forced their pilot to abort two landing attempts in the capital.
On their last day of Pakistan visit, Prince William and his wife Kate Middleton visited Army Canine Centre in Islamabad, which is modelled on the UK Defence Animal Training Centre at Melton Mowbray, Daily Mail’s Rebecca English said on Twitter.
“The UK has provided training and advice to the Pakistan Armed Forces for over 10 years, and is currently supporting the Pakistan Counter Improvised Explosive Device (CIED) programme, which in part breeds and trains dogs to identify explosive devices,” she further said.
There has been no statement yet from Kensington Palace on Thursday’s mid-air drama, which reportedly saw the Royal Air Force pilot circle for an hour during one of the fierce thunderstorms that periodically hit Islamabad in October, before finally abandoning the attempt and returning to Lahore.
It came after the royals spent a busy day in the eastern city of Lahore, during which they played cricket, visited a children’s orphanage and a cancer hospital, and toured the iconic Badshahi Mosque, one of the world’s largest mosques.
A planned trip to the famed Khyber Pass — one of the two major border crossings in to Afghanistan — was called off after the flight drama forced change of schedule.
Kensington Palace had called the trip, the Cambridges’ first official visit to Pakistan, their “most complex” tour to date as the royals seek to boost ties between Britain and the second largest country in the Commonwealth.
They have spent their five-day tour promoting causes such as girls’ education, conservation and climate change awareness.