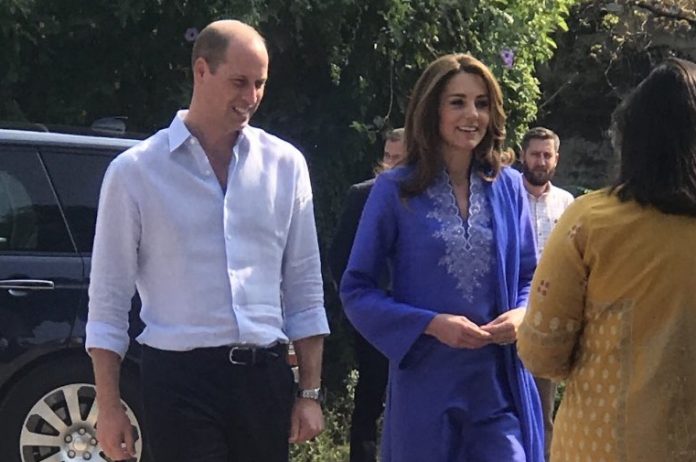 ISLAMABAD: The Duke and Duchess of Cambridge, Prince William and Kate Middleton, on Tuesday morning paid a visit to the Model College for Girls in Islamabad.
Yesterday, the British royal couple arrived in Pakistan on a five-day tour as they are “looking forward to building a lasting friendship with the people of Pakistan.”
Foreign Minister Shah Mahmood Qureshi, British High Commissioner in Pakistan Thomas Drew and other high level officials accorded a warm welcome to Prince William and Kate Middleton upon their arrival.
Two children clad in traditional dress presented bouquet of flowers to the distinguished guests. The guests thanked them and talked to them for a while.
The royal couple will meet Prime Minister Imran Khan and President Arif Alvi today. Following their meeting with Khan and Alvi, the royal couple will pay a visit to Lahore on October 16 and Chitral on October 17.
William and Kate disembarked from the Royal Air Force plane onto a red carpet that had been rolled out for them.
A team of more than 40 doctors, paramedics and medical staff has been included alongside the security squad of the royal couple. More than 40 journalists also arrived with Prince William and Kate Middleton.
The five-day visit, which will end on October 18, has been organised at the request of the United Kingdom’s (UK) Foreign and Commonwealth Office.
The visit comes 13 years after Charles and Camilla – the Prince of Wales and the Duchess of Cornwell – toured the country in 2006. Pakistan still vividly remembers the late Princess Diana’s visit in 1996.
“The UK’s links with Pakistan are extensive, and Their Royal Highnesses are looking forward to building a lasting friendship with the people of Pakistan,” read a statement by the royal couple’s spokesperson on Oct 4.
During the course of their visit, Prince William and Kate “will pay respect to the historical relationship between Britain and Pakistan” but the larger focus will remain “on showcasing Pakistan as it is today – a dynamic, aspirational and forward-looking nation”, read the statement.
British High Commissioner in Pakistan Thomas Drew said during their five-day visit, the Royal couple would visit the ‘breadth and depth’ of Pakistan.
In his video message shared on Twitter, the High Commissioner said the visit would largely focus on showcasing Pakistan as a dynamic, aspirational and forward looking nation.
He said most importantly the Royal couple hope to meet as many Pakistanis as possible during the visit particularly the youth who are shaping future of the country.
He said the duo was looking forward to building a lasting friendship with people of Pakistan.
Meanwhile, Special Assistant on Information and Broadcasting Dr. Firdous Ashiq Awan has welcomed the British Royal Couple over arrival in Pakistan saying visit of Duke and Duchess of Cambridge Prince William and Kate Middleton to Pakistan is reflection of peaceful and safe Pakistan.
In a tweet, she said visit of the Royal Couple would further stable and strengthen the longstanding historical relations between Pakistan and United Kingdom.