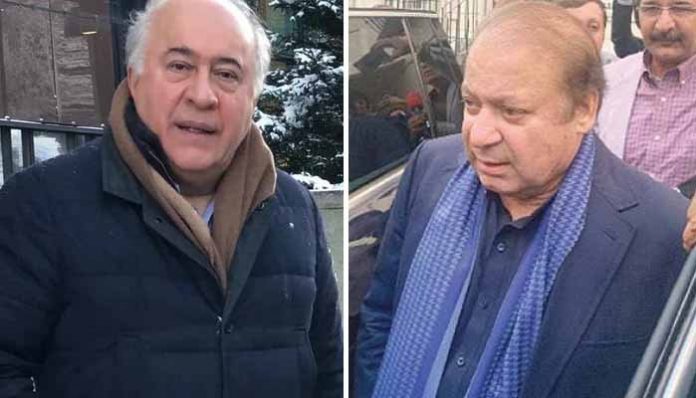 LONDON: Assets recovery firm Broadsheet’s CEO Kaveh Moussavi has issued a profound apology to former prime minister Nawaz Sharif, withdrawing all corruption allegations and for being part of a “witch hunt” that has been running in the name of accountability for over two decades.

In an interview with a renowned  reporter of Pakistan Press, the Broadsheet CEO and former Oxford University associate said he was apologising to Nawaz Sharif to set the record straight that he had not found a “scintilla of evidence” and “not one rupee” during Broadsheet’s forensic investigation against Nawaz Sharif and his family for over two decades.

Last year, Kaveh Moussavi had won over $30 million from the government of Pakistan at London High Court after the arbitration judge Sir Anthony’s ruling in favour of Moussavi and the same case had cost Pakistan over $65 million. Kaveh Moussavi had worked as an International Arbitrator at the International Court of Arbitration and as an Associate Fellow at the Centre for Socio-Legal Studies at the University and Head of Public Interest Law, Oxford University.

Broadsheet had signed a contract with the Pervez Musharraf government in 1999 to find the wealth allegedly stolen by Nawaz Sharif, Benazir Bhutto and hundreds of Pakistanis from civil, political, business to military backgrounds.

Kaveh Moussavi said Broadsheet’s investigations found no evidence of corruption, stolen or hidden wealth or unexplained wealth anywhere in the world. He said: “Not one rupee. We found a lot of plundered wealth but not one rupee relating to Mr Nawaz Sharif, the former prime minister, or any member of his family. Not one rupee, I can categorically say that after virtually 21 years of investigations. If anybody tells you otherwise, they are lying to you.”

Kaveh Moussavi has extensively dealt with the National Accountability Bureau (NAB) and said he had no doubt left that the NAB had made cases against Nawaz Sharif on political grounds and that was the reason why he was apologising to Nawaz Sharif.

Moussavi said: “I have no hesitation in issuing an apology to the former prime minister Nawaz Sharif for having been a part to the sham, the scandalous non-sense masquerading as NAB. It’s a fraud through and through.”

When asked if he was aware that he was apologising to Nawaz Sharif, as there were deep political consequences to it, Kaveh Moussavi repeated his apology addressing Nawaz Sharif directly. “I repeat it: Mr Sharif, we owe you an apology because Mr Sharif you clearly were the victim of a massive organised scandalous witch-hunt. There’s no question about that. When facts change, I change my views. Twenty two years ago when Pervez Musharraf had asked us to investigate you, we were led to believe and we started investigating and at every turn we found that investigation was sabotaged not because we were getting close to things but because the intention was something else. That actually was a witch hunt the intention was not to find any looted assets.”

Kaveh Moussavi added: “We proceeded independently and I can tell you categorically we didn’t find one rupee of stolen assets or assets which can be attributed to either Mr Nawaz Sharif or his family.”

Kaveh Moussavi spoke about his own role in the allegation that surfaced around 2018 election times that Nawaz Sharif had tens of millions of dollars parked in a Far East bank – and the same allegation made its way to powerful circles at the time. Moussavi said the amount was fictitious and there was no truth to the allegation.

Kaveh Moussavi said: “I feel that we too were subject to a fraudulent misrepresentation by a criminal organisation called NAB. We, in good faith, right up to the end of the tribunal in London, whatever information we found we passed it on to the NAB but they showed no interest whatsoever. My own investigation shows that it was a complete sham. They were not interested and any allegations attributed to me are withdrawn without any hesitation.”

Kaveh Moussavi, through British Pakistani Zafar Ali QC, had engaged in the summer of 2019 with the Pakistan govt over the same allegation but Pakistan and Broadsheet didn’t strike a deal, as Kaveh Moussavi was asked by a senior visiting Pakistani official to pay him a cut in return for signing the agreement for assets recovery.

Kaveh Moussavi said he realised that the government of Pakistan had no interest in fighting actual corruption and it was interested only in going after Nawaz Sharif and his family and that’s “the reason for my profound disappointment”.

Kaveh Moussavi revealed that he was in touch with Prime Minister Imran Khan through Shipping and Ports Minister Ali Zaidi and that he had evidence to prove his conversations with Ali Zaidi.

He said: “I was in direct contact with the government. I sat and had a lunch with minister Shehzad Akbar directly in London. I had a telephone chat with another minister Ali Zaidi who was commissioned by Prime Minister Imran Khan to speak with me and to cooperate but they showed not a scintilla of evidence that they were interested in going after the stolen money. They were interested in using whatever we found as a political capital against their enemies, which I am afraid, was my experience with the NAB right from day one. From day one we insisted that we are not going to be an instrument of witch-hunt. Very soon it became clear that the NAB was nothing but an instrument of witch-hunt – a very incompetent and corrupt one.

The reason why Imran khan promised moon and didn’t get anywhere was because they had no intention of going anywhere.”

Kaveh Moussavi said Ali Zaidi used to call him on Skype and they had “long conversations. I made sure there were witnesses in the room who would listen and there was written correspondence between myself and him and at one point he asked me if Shehzad Akbar was corrupt and whether he wanted to make money for himself. I said I make any accusation against anyone until such times that we have evidence. Look neither I am hesitating in withdrawing everything that was said about former prime minister Nawaz Sharif. It’s because I have the evidence pointing in the other direction.”