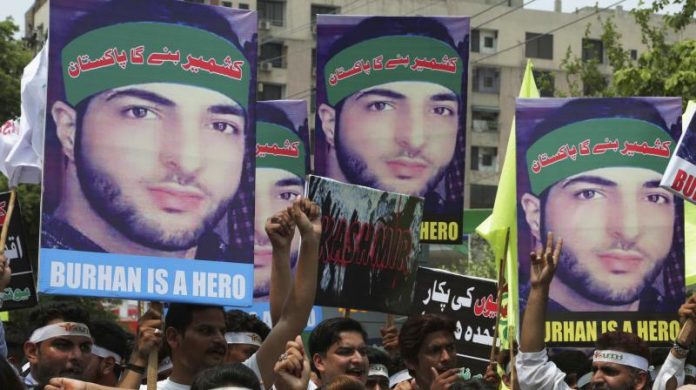 MIRPUR: Young Kashmiri freedom fighter Burhan Muzaffar Wani was remembered on his third martyrdom anniversary falling on July 8 (Monday) at both sides of the Line of Control.
Paying rich tribute to the young Kashmir freedom struggle leader, AJK Prime Minister Raja Farooq Haider Khan has said that shaheed Burhan Muzaffar Wani was a brave son of Kashmir.
Haider said that his martyrdom gave a new impetus to the Kashmir freedom movement.
Terming Burhan Muzaffar Wani as ever-lasting great symbol of the struggle against oppression and tyranny, he expressed his resolve that no stone will be left unturned to complete the mission of the thousands of Kashmiri martyrs.
Special ceremonies followed by mass public rallies will be held at all district and tehsil headquarters in AJK including the state’s metropolis to mark the martyrdom anniversary of Wani with full respect and honor.
And in Indian occupied Kashmir, there will be complete shutter-down strike across the occupied valley to mark the martyrdom anniversary of Burhan Muzaffar Wani, on the call of the elderly Kashmir freedom struggle leader Syed Ali Gillani and Mir Waiz Omer Farooq.
Wani, a resident of Tral and commander of Hizbul Mujahideen was martyred along with two associates by the Indian troops in a fake encounter in Kokernag area of Islamabad district on July 8 in 2016.
His martyrdom had triggered a sustained wave of violent protests that claimed the lives of at least 100 civilians.