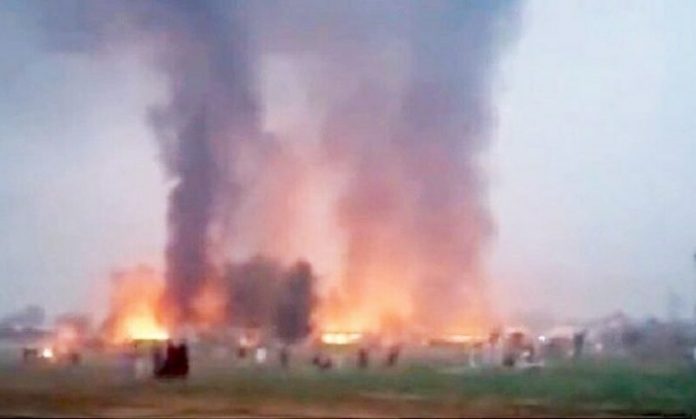 Authorities with the help of Ulema were able to restore calm in Mandani area of Charsadda’s Tangi Tehsil after a violent mob set fire to a police station and two check posts. Several police vehicles were also reportedly destroyed in the violence, but no causality was reported.

Khyber Pakhtunkhwa Law Minister Fazal Shakoor Khan, who hails from Charsadda, was the highest official to confirm the incident while speaking to media. Officials told that the calm has been restored with the help of Ulema after the day’s events. The mob have stopped violence though they have not dispersed yet.

The violence began on Sunday when police arrested a man for the alleged desecration of the Holy Quran and took him to Mandani’s Inspector Jahangir Khan Police Station.

The police tried to resist using tear gas shells and batons, but they had to leave the police station eventually. Later, the mob also set fire to two police checkposts in the area.

There were reports that the mob also wanted to set fire to more police checkposts but the Ulema’s help was enlisted by authorities to stop the violence and the mob ended their rampage. Officials have also called in police force from other areas of the district.