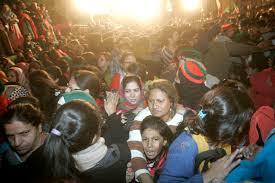 LAHORE: A case has been filed against those who harassed women workers of Pakistan Tehreek-e-Insaf at its rally at Mall Road, Lahore Sunday.
Inspector Bushra Butt registered the FIR within the jurisdiction of Civil Lines police station under sections 147, 354, 506 and 394 of Pakistan Penal Code.
CCPO Lahore said the alleged harassers were identified via footage received from various sources.
“Their images have also been sent to NADRA for further investigation,” he said, adding separate teams have been constituted to look into the matter.