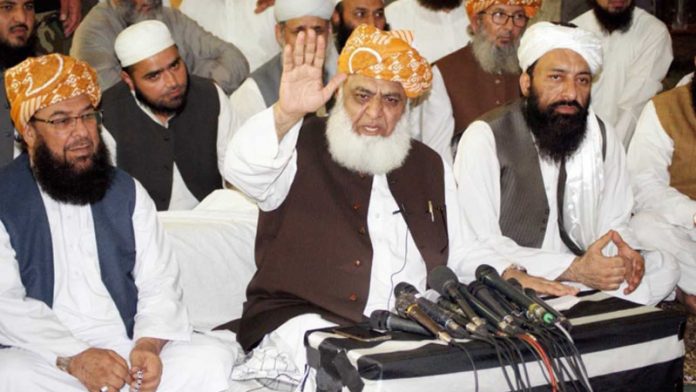 ISLAMABAD: A case on Monday has been filed against Jamiat Ulema-e-Islam-Fazl’s (JUI-F) representatives over allegedly asking extortion from the people of Karachi for anti-government rally Azadi March.
According to police personnel, JUI-F’s local leaders Sabir Ashrafi, Hanif and Saleem have been named in the case lodged by Pakistan Tehreek-e-Insaf’s (PTI) Kashif Nizami.
First information report (F.I.R.) revealed that JUI-F has allegedly demanded Rs50,000 for the arrangements of sit-in in the federal capital, Islamabad and also threatened the masses of severe consequences if they fail to pay the extortion money.
One the other hand, Lahore High Court (LHC) has fixed petition against JUI-F’s anti-government protest ‘Azadi March’ for hearing.
The plaintiff has adopted the stance that constitutional government cannot be dissolved before completing its five year tenure. JUI-F Chief Maulana Fazlur Rehman has formed private army for protecting his Azadi March, the plea claimed.
The petitioner further demanded the court to take up the case and stop JUI-F activists’ private army from holding illegal sit-in in the federal capital, Islamabad.
JUI-F Chief Maulana Fazal-ur-Rehman had announced that his party’s anti-government ‘Azadi March’ to Islamabad will take place on October 31 instead of October 27.
“We have decided to enter Islamabad on October 31,” he said, adding that marchers will express solidarity with Kashmiris on Oct 27 and then leave for the federal capital. “People from all over the country will enter Islamabad at the same time, he told.
Maulana Fazal-ur-Rehman said he will announce the next plan of action himself after reaching Islamabad. The protests will be staged nationwide if Azadi March is stopped, he stressed.