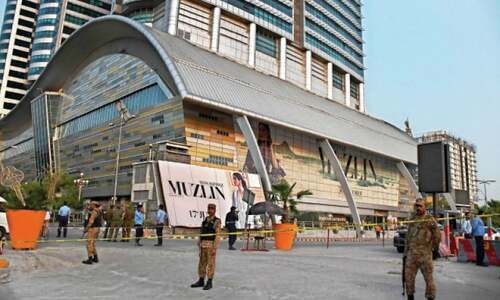 ISLAMABAD: The Capital Development Authority (CDA) on Tuesday decided to de-seal Centaurus Mall hours after it was sealed on the orders of the federal government.

The Centaurus Mall— a high-rise shopping centre located in the capital’s F-8 sector on the confluence of Jinnah and Faisal avenues — has been sealed by the CDA over the violation of building regulations in an overnight raid.

In a statement, the CDA said the decision of reopening of the Centaurus Mall has made keeping in view the difficulties of traders.

“The Centaurus Mall will be de-sealed soon,” the authority said, adding that the section which comes under “building violations” will remain closed.

The development comes after Pakistan Tehreek-e-Insaf (PTI) and the traders’ associations of Islamabad denounced the government’s decision as an act of “political revenge”.

The CDA sealed the premises on Monday night, with a notice of the authority reading: “The premises has been sealed on account of non-conforming use by order of director building control-city, CDA.”

The PTI linked the sealing of the mall to criticism of Prime Minister Shehbaz Sharif by Azad Jammu and Kashmir premier Sardar Tanveer Ilyas — who owns the mall — for “not mentioning the sacrifices of Kashmiri people” during a speech on Monday.

The verbal spat took place during an inaugural ceremony of the refurbishment project of units 5 and 6 of the Mangla Dam Hydroelectric Power Plant, built on the Jhelum river in the Mangla area of AJK.

As PM Shehbaz was about to wrap up his address, Ilyas interrupted him and asked what he had done for AJK.

In a video clip that went viral on social media, PM Shehbaz could be seen gesturing to the AJK premier to sit down and raise his concerns after the speech.

On Tuesday, PTI Chairman Imran Khan condemned the federal government’s move and called it an actor of political vengeance.

“Sealing of Centaurus Mall by [the] PDM mafia in response to PM AJK censuring Shehbaz Sharif for not mentioning sacrifices of Kashmiris shows there is law of the jungle in Pak since last 8 months,” tweeted Imran.