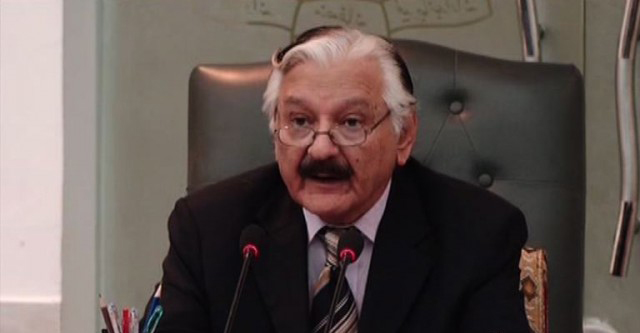 ISLAMABAD: Chief Election Commissioner Justice (retd) Sardar Mohammad Raza Khan on Friday refused the oath-taking of the newly appointed Election Commission members.
A statement issued by the CEC said that the appointment of new members is a violation of the constitution. “The appointment of new members was not in accordance with Articles 213 and 214 of the constitution”, he stated.
CEC Mohammad Raza Khan has formally notified Parliamentary Affairs in this regard.
The federal government appointed two members of the Election Commission of Pakistan (ECP) — Khalid Mehmood Siddiqui from Sindh and Munir Ahmed Kakar from Balochistan yesterday.
On August 22, Pakistan Muslim League-Nawaz (PML-N) spokesperson Marriyum Aurangzeb said that her party rejects the appointment of Election Commission of Pakistan (ECP) members and terms it ‘unconstitutional’.
The statement issued by Marriyum Aurangzeb stated that the parliamentary committee was ignored in the appointment of the ECP members. The government issued a notification bypassing the Parliament, she added.
She accused the government of violating constitutional, parliamentary, democratic requirements and rules. “The PML-N demands the government to adopt a constitutional and parliamentary procedure on the unilateral step and withdraw the decision”, she added.
PML-N spokesperson expressed that her party demands the ECP members to be convened in consultation with the joint opposition.