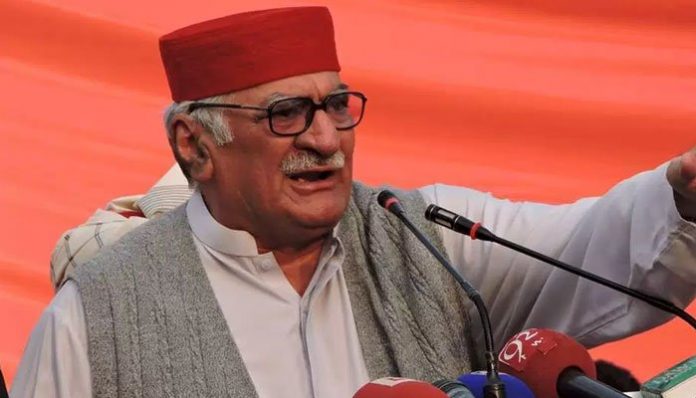 TIMERGARA: President Awami National Party (ANP) Asfandyar Wali Khan has said that certain political forces were creating chaos and uproar in the country for settling their personal scores, leaving behind the core issues facing the masses.
Addressing a public meeting in Lower Dir, the ANP president said decency and respect in politics had been abolished with entry of Imran Khan in the national politics.
The Pakistan Tehreek-e-Insaf (PTI) chief Imran Khan, he said never stood by his words and actions and he frequently changed stances over issues in one day.
The PTI parliamentarians openly sold out their votes in the senate elections, he said adding there are rumors that even PTI central leadership was involved in bargaining of the vote for the upper house of the Parliament.
Lashing out the Jamat-e-Islami, Asfandyar said that party that rules upper and lower Dir districts for decades remained backward and underprivileged.
The ANP chief further said that any further delay in merger of FATA into KP would further complicate situation on ground.
He suggested proper legislation to this effect was needed to provide representation to the tribal people in provincial legislature.
The public meeting was also addressed by provincial chief of ANP Amir Haider Khan Hoti who said that nobody should think of ending ANP.
He also called reunification of Pakhtunkhwa in the province for protection of their rights.
The public meeting was also addressed by district Dir president Hussain Shah and former Senator Zahid Khan. – APP