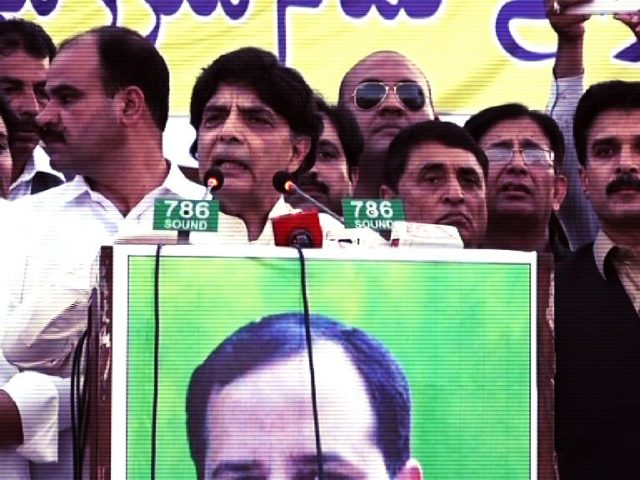 RAWALPINDI: Former Interior Minister Chaudhry Nisar Ali Khan said on Saturday that he received disloyalty from the Pakistan Muslim League-Nawaz leader Nawaz Sharif despite giving him support for as many as 34 years.
Addressing a public rally at Chakri, the senior politician said that he has always held his head high in politics and can’t stand with his hands folded before anyone.
The disgruntled PML-N leader will be contesting from constituencies NA-63, NA-59, PP-10 and PP-12 in the forthcoming polls as an independent candidate. He has been allotted the symbol of a ‘jeep’ for the upcoming general election.
PML-N President Shehbaz Sharif has admitted his disassociation with Nisar over political differences.
Shehbaz said that he had convinced Nawaz Sharif for awarding ticket to Nisar, but it could not happen because of issuance of statements from both sides.
“I have had an affiliation with Chaudhry Nisar and I won’t issue statements on that throughout my life,” he said.