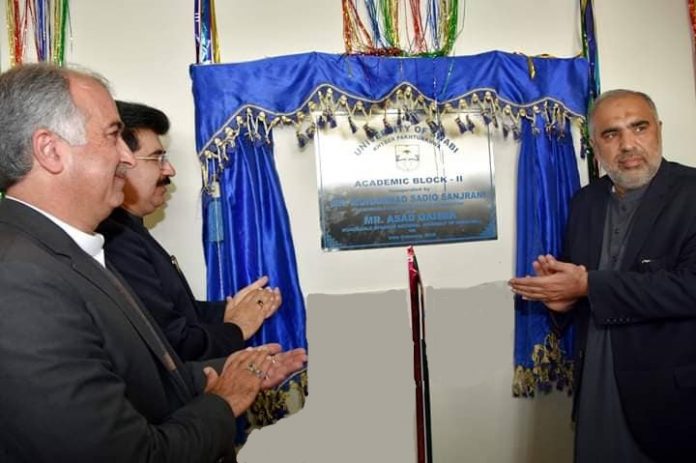 SWABI: Chairman Senate Sadiq Sanjrani and Speaker National Assembly Asad Qaiser on Sunday inaugurated the newly constructed campus of the University of Swabi.
Talking to media on the occasion, NA Speaker Asad Qaisar said the government has chalked out a comprehensive plan with collaboration of United Nations Development Program (UNDP) for welfare of youth.
Asad Qaisar said that the nation is on the same page against Indian warmongering. “Pakistan is a peaceful loving nation and reserves the right of retaliation against any misadventure,” he said.
The speaker urged India to provide concrete evidence in the attack, rather than blaming Pakistan for its security failure.
Replying to a query, Qaiser said improving quality education in the country is among top priorities of the government.
Speaking on the occasion, Chairman Senate Sadiq Sanjrani maintained that nation is united against any cross-border aggression from India, under pretext of Pulwama attack.
He said India is trying to distort Pakistan’s focus as the country is moving on the right path.
Sanjrani said the role of education in development and prosperity of the country cannot be denied.
The chairman senate vowed to establish an university in Chagai, Balochistan.
The Senate’s chairman announced twenty million rupees for Sports complex of the Swabi University.