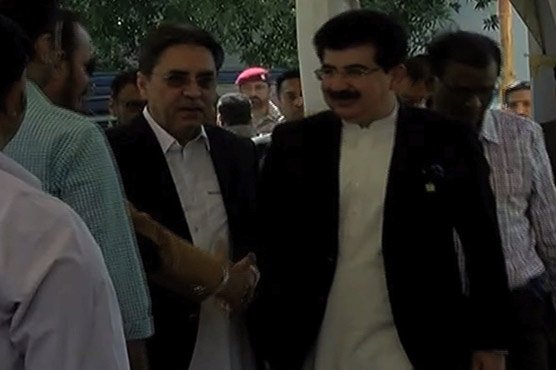 KARACHI: A meeting was held between Senate Chairman Sadiq Sanjrani and the members of Muttahida Qaumi Movement Pakistan’s (MQM-P) Rabita Committee in Karachi on Sunday.
The meeting was attended by MQM-P convener Dr Khalid Maqbool Siddiqui, Amir Khan, Faisal Sabzwari, Ameenul Haq, Senator Naseebullah and Senator Ahmed Khan.
During the meeting, Sadiq Sanjrani said that he was worried after getting the report of Dr Khalid Maqbool Siddiqui’s dissociation with the federal cabinet. To this, Siddiqui said that his political party has formed a coalition to resolve public issues while the ministries are just a temporary thing.

Also read: PM Imran orders party leaders to contact coalition partners, address grievances
Sanjrani said a government committee is working on the matters MQM-P has raised and all issues will be resolved soon. Siddiqui said the government committee was changed many times and MQM-P is now waiting for the progress on the matters.
He said that his political party had voted for Sadiq Sanjrani who is representing Balochistan and MQM-P has always raised voice for the rights of the province. He added that MQM-P and Senate chairman vowed to raise voice for the issues of both provinces.
The Senate chairman admitted that MQM-P had voted him for Balochistan. Sanjrani added that he cannot talk more over political matters as Senate chairman, however, he announced to stand alongside MQM-P for the betterment of the country.
“After putting aside minor issues, we will jointly work for the betterment of the country. [Balochistan Chief Minister] Jam Kamal has also said that he will meet MQM-P leaders. We will resolve all issues by sitting together. Khalid Maqbool Siddiqui should take back his resignation and he will consult his party leadership. We are all united and I came here to thank Khalid Maqbool Siddiqui and to show solidarity with him,” said Sanjrani.