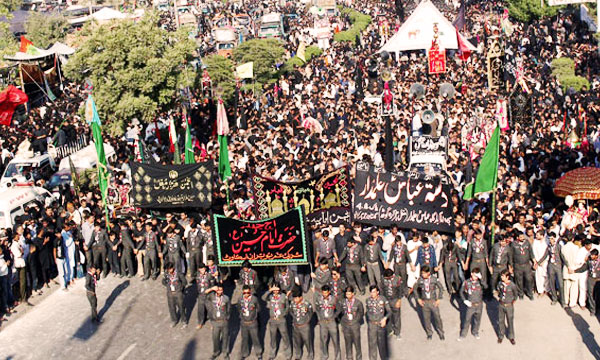 ISLAMABAD: The Chehlum of Hazrat Imam Hussain is being observed today with religious fervor across the country amid tight security measures.
The processions to mark the 40th day after the martyrdom of Hazrat Imam Hussain and his companions in Karbala are being taken out from all big and small cities of the country.
Security has been beefed up across the country with installation of walkthrough gates, close circuit TV cameras, and deployment of heavy contingents of the personnel of the law enforcement agencies to ensure that the day passes off peacefully without any untoward incident.
In Karachi, MA Jinnah road has been cordoned off from Numaish Chowrangi to Tower with arteries leading to it blocked with containers and barbed wire.
The main procession will be taken out from Nishtar Park at around 1:00pm and will culminate at Hussainiya Iranian Imambargah. About 5,000 police personnel have been deployed along procession routes with walkthrough gates at different points to check mourners.
Sharpshooters have also been deployed on rooftops of high-rises along routes of procession. Besides, mobile phone jammers have been installed on routes.
The provincial government had imposed a ban on pillion-riding in the metropolis.
According to a statement issued by Sindh police two days back, some 100 big and small processions will be taken out while more than 460 majalis would also be held in different areas in the city.
Around 17,900 police personnel will perform duty in the province on the day.