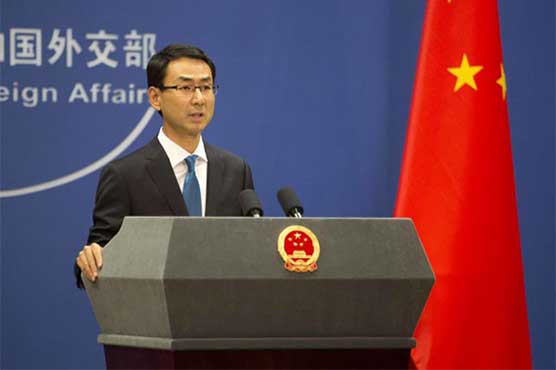 ISLAMABAD: China on Tuesday defended Pakistan saying the world community should acknowledge its all-weather ally’s “outstanding contribution” to counter terrorism, a day after US President Donald Trump lashed out at Islamabad for providing safe havens to terrorists.
“Pakistan has made enormous efforts and sacrifices for the fight against terrorism and has made very outstanding contribution to the global cause of counter-terrorism. The international community should acknowledge that,” Chinese foreign ministry spokesman Geng Shuang said here when asked about Trump’s criticism of Pakistan.
He said China is glad to see Pakistan engaging in international cooperation, including counter-terrorism, on the basis of mutual respect so as to contribute to regional peace and stability.
“China and Pakistan are all-weather partners. We stand ready to promote and deepen our all-round cooperation so as to bring benefits to the two sides,” Geng said.
Earlier on Monday, Islamabad called on the US envoy to Pakistan David Hale to explain Donald Trump’s claims that Pakistan was harboring and aiding militants from neighboring Afghanistan.
Hale was summoned to the foreign office, hours after the US president used his first tweet in 2018 to slam Pakistan for “lies & deceit.” Trump also hinted at cutting or limiting US aid to Pakistan.
“The United States has foolishly given Pakistan more than 33 billion dollars in aid over the last 15 years, and they have given us nothing but lies & deceit, thinking of our leaders as fools,” Trump wrote on Twitter. “They give safe haven to the terrorists we hunt in Afghanistan, with little help. No more!”
The US embassy to Pakistan confirmed that the meet took place but refused to provide details on the conversation.
“We don’t have any comment on the substance of the meeting,” a spokesman said.
Foreign Minister Khawaja Asif said Trump’s comments were motivated by US failures in Afghanistan. Asif also said Pakistan did not need US aid.
“He has tweeted against us and Iran for his domestic consumption,” Asif told a private TV channel on Monday.
“He is, again and again, displacing his frustrations on Pakistan over failures in Afghanistan as they are trapped in dead-end street in Afghanistan.”