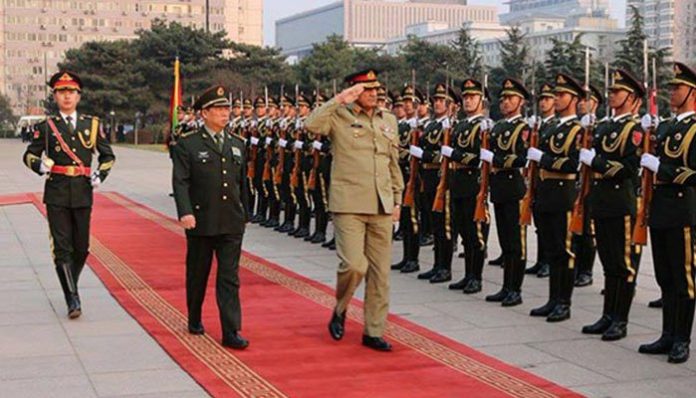 BEIJING: The Chinese military leadership on Tuesday supported the stance of Pakistan on the lingering occupied Kashmir dispute with India, according to a press release issued by the Inter-Services Public Relations (ISPR).
The affirmation was made when Chief of Army Staff General Qamar Javed Bajwa met General Han Weiguo and General Xu Qiliang of the People’s Liberation Army in Beijing. Issues of regional security and defence cooperation were discussed in the meeting.
According to the statement, the COAS apprised the Chinese military leadership about consequences of the ongoing situation in Indian-occupied Kashmir, and said that India needed to respect United Nations resolution in this regard and ensure provision of human rights to Kashmiris.
“Chinese military leadership supported Pakistan’s principled stance on Kashmir issue, and appreciated sane Pakistani approach in the interest of peace,” the ISPR stated.
The ISPR also said that in the meeting, the two sides agreed that continued Pak-India tension would have serious implications for peace and stability in the region.
The media wing of the military also told the media that the COAS apprised the Chinese military leadership about the peace efforts made by Pakistan, and said that the efforts would not be at the cost of any compromise on principles or honour and dignity of the nation.
Both sides also discussed the developing situation in the Gulf region and efforts for peace in Afghanistan, the press release said. They also agreed to enhance existing defence cooperation in line with history of mutual time-tested relationship.
Earlier upon arrival at the PLA headquarters, COAS was presented with a guard of honour. COAS General Bajwa is likely to meet high-ranking Chinese officials along with Prime Minister Imran Khan on his trip.