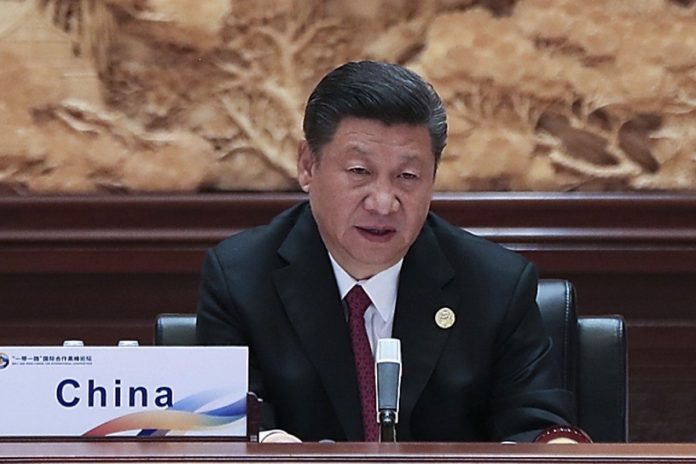 BEIJING: Chinese President Xi Jinping on Saturday urged world leaders to expedite work for basic infrastructure and industrial development to meet the challenges of the economy being faced by the world.
Addressing the leaders’ roundtable meeting at the Second Belt and Road Forum for International Cooperation in Beijing, the Chinese president called on countries to open their borders in order to boost trade and to upgrade the living standards of people.
Noting the Belt and Road (BRI) initiative as an important forum for the economic development of the entire region, the Chinese president said BRI has achieved great progress since the first Belt and Road Forum in May 2017.
“China looks forward to working with all parties to improve the concept of cooperation and focus on building the Belt and Road with high quality on the basis of extensive consultation and the rule of law, joint efforts, shared benefits and equal opportunities for all,” Xi said.
Xi added that the BRI focuses on infrastructure interconnection, accelerating intelligent manufacturing and cooperating in frontier areas of the digital economy.
The Chinese president also called for joint efforts to meet the challenges of climate change.
A day earlier, President Xi during the opening summit of the Second Belt and Road Forum had said the BRI “must be green and sustainable”, adding that the massive infrastructure and trade plan would deliver “high-quality” growth for all.
Xi in his keynote speech on Friday said that environmental protection must underpin the initiative “to protect the common home we live in”.
“Operate in the sun and fight corruption together with zero tolerance,” Xi said.
“Building high-quality, sustainable, risk-resistant, reasonably priced, and inclusive infrastructure will help countries to fully utilize their resource endowments,” he said.
Leaders from 37 countries are in Beijing for the three-day forum, with officials from scores of other nations in attendance.
Summit attendees include Russian President Vladimir Putin and Prime Minister Imran Khan of Pakistan, a close China ally and among the biggest recipients of BRI investment, as well as Prime Minister Giuseppe Conte of Italy, which recently became the first G7 country to sign on.
PM Imran told the summit that in a world of uncertainty, the initiative offered “a model of collaboration, partnership, connectivity and shared prosperity”.
EU powers Germany and France have sent ministers to the summit.
Putin called for a global response against protectionism, unilateral sanctions and “trade wars” — veiled criticisms of the United States.
The United States, which sent a senior White House official to the first BRI summit in 2017, has not dispatched any officials.
Washington has dismissed BRI as a “vanity project” and rebuked Rome for signing up to the scheme.
With US negotiators heading to China for a new round of trade talks next week, Xi repeated a pledge to increase imports and vowed to abolish “unjustified” subsidies to Chinese firms — both key US demands.
Since Xi launched BRI in 2013, China has invested $90 billion in projects while banks have provided upwards of $300 billion in loans, according to Chinese officials.
But examples of debt trouble abound.
Sri Lanka turned over a deep-sea port to China for 99 years after it was unable to repay loans. Pakistan needs an international bailout.
Pushing back has proved a successful election issue in Sri Lanka, the Maldives and Malaysia, as the Chinese project was used to whip up fears about eroding sovereignty.
After his electoral victory last May, Malaysian Prime Minister Mahathir Mohamad cancelled some planned works and renegotiated a rail project cutting 30 per cent off the price tag.
But Mahathir said at the summit that “the Belt and Road idea is great” and he “fully” supports it. …Agencies