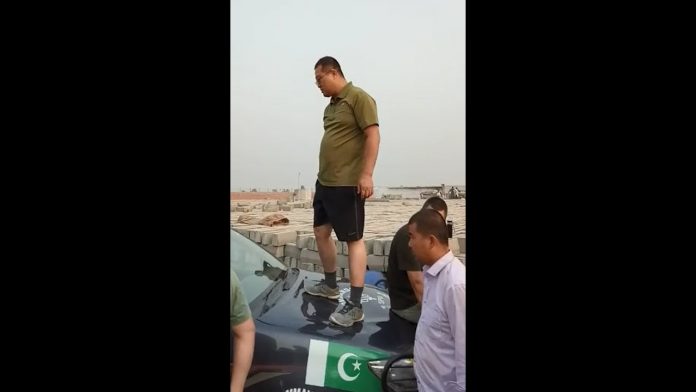 LAHORE: Five Chinese engineers and staff workers who launched a physical attack on a police squad deployed for their security in Khanewal were sent packing from Pakistan on Tuesday.
A letter, written by the Khanewal district administration to the Punjab government, had declared Xu Ling, the Country Project Manager, Tian Weijun, the Administration Officer, Liu Hui, the Material and Equipment Manager, Wang Yifan, officer for Financial Affairs and Tan Yang, the Field Engineer as the “persona non grata being the reason of this incident”.
“They (Chinese workers) must have realised the sensitivity of their security and should not have taken the law in their hands,” the letter reads.
The letter had recommended that the Chinese officials that had employed the workers “ensure SOPs (standard operating procedure) regarding security and provision of allied security arrangements as conveyed to them repeatedly”.
Last week, Chinese engineers and staff workers, engaged in the construction of M4 Motorway from Bahawalpur to Faisalabad, had pounded security officials for trying to stop them from leaving their camp without a security squad.
Several mobile phone clips doing rounds on social media show Chinese nationals approaching the police officials in a provocative manner and attacking them. A video showed a Chinese national standing on the bonnet of a police van, another video showed several Chinese nationals trashing policemen and some local people in plain clothes.
According to police officials, Chinese engineers and other officials wanted to leave their camp in Khanewal and visit a “red-light” area on Tuesday night. They resorted to agitation when denied permission to leave the camp without being accompanied by security officials.
Later, the Chinese engineers also cut power supply to the police camp established within the main construction camp, the officials added.
On April 4, the Chinese workers stopped work on the project and abandoned heavy machinery and vehicles on various roads in the area. They also resorted to violence and attacked police in their camp.
Subsequently, the protesting Chinese engineers wrote a letter to Punjab Chief Minister Shahbaz Sharif, claiming that police officials refrained them from performing their duties and attacked them.
They also accused the security in-charge of attempting to hit the Chinese workers with his vehicle. Police officials, however, rejected the accusations and said they were fabricated.