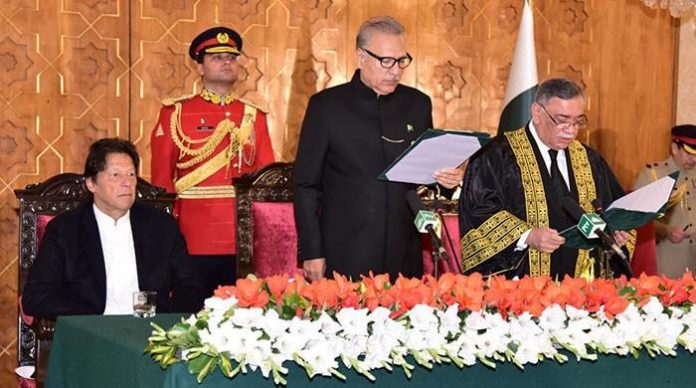 PESHAWAR: A constitutional petition challenging the oath-taking of the incumbent Chief Justice of Pakistan Asif Saeed Khan Khosa was filed in the Peshawar High Court (PHC) on Friday.
The petition demands that the chief justice should take the oath of the office of the country’s top judge afresh. “The constitutional obligations were not fulfilled during the oath-taking of Justice Khosa.”
It states that President Arif Alvi’s taking oath from the country’s top adjudicator is against the relevant constitutional obligations for he belongs to a political party.
On Jan 18, Justice Asif Saeed Khan Khosa, the senior most judge of the Supreme Court, took oath as the 26th Chief Justice of Pakistan in a ceremony held at President House in Islamabad.
President Alvi administered oath to the new chief justice of the country. Prime Minister Imran Khan, Chief of the Army Staff (COAS) General Qamar Javed Bajwa, federal ministers, sitting and former judges of the Supreme Court apart from foreign dignitaries attended the ceremony.
Justice Khosa replaced outgoing chief justice Mian Saqib Nisar who retired on Jan 17. He will serve as the top judge of Pakistan till Dec 20, 2019.