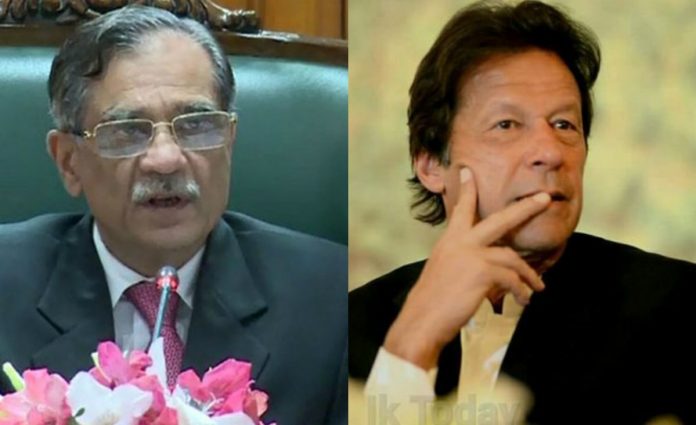 ISLAMABAD: Chief Justice of Pakistan (CJP) Mian Saqib Nisar on Monday has directed Prime Minister (PM) Imran Khan to set an example for others by becoming the first one to pay fine for regularization of his Bani Gala.
During the hearing of illegal constructions in the suburbs of the federal capital, CJP clarified that PM Imran will have to appear in the court if he fails to pay fine on time.
Imran Khan raised this issue and now when he has become Prime Minister of Pakistan, everything is in his hands, he added.
The top judge further ordered to resolve the issue of illegal constructions in Islamabad till the evening.
Previously, CJP had ordered the committee to cancel lease of the companies who fail to fulfill the rules and present report within ten days.
Earlier, SC had directed the concerned authorities to demolish illegal constructions in surroundings of Nala Korang, Bani Gala, following the recommendations of Survey of Pakistan (SP).
Additional Attorney General said that Nala Korang was full of garbage due to which its water flow was stopped.
Babar Awan, counsel for PM informed the bench that matter regarding regularization of the land had been sent to the cabinet for final decision.