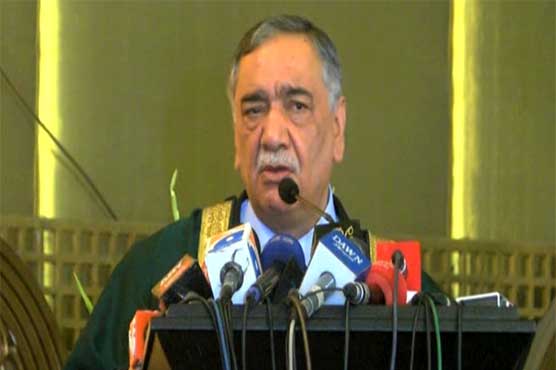 LAHORE: Chief Justice of Pakistan (CJP) Asif Saeed Khosa on Saturday urged lawyers to improve their role in the society and master history, mathematics and literature, so that others could not point fingers at them.
He addressed students at the graduating ceremony of the Pakistan College of Law in Lahore.
“In order to be a good lawyer, you need to master history, mathematics and literature,” he said while quoting Lord Denning, a noted English lawyer and judge.
“Lawyers attain ideal status in the society as they ‘fight’ for its betterment,” he said while emphasising on lawyer’s role collective interest of the society rather than for one’s own interest.
He stressed that students must learn these subjects for being good lawyers.
He recalled the popular mass protest, the Movement for the Restoration of Judiciary, in Pakistan from 2007-2009 for the protection of judiciary.
He outlined an example of his late father, who he said was 55 years of age and had used to travel on a bicycle for travelling to and from the court.
“Everyone used to respect him,” he said, adding that law is still a respectable profession in Pakistan.
“Every law is made in some historical context. We are at a point in history where terrorism as a law is a hot topic in courts,” he pointed out.
Justice Khosa said that in the coming few years, lawyers will wonder about the background of such stringent anti-terrorism laws. “To understand the stringency of the law and provisions of the law, you must know the historical background,” he said.
Mathematics, he said, is required because all arguments should be mathematically precise. You may have a beautiful, precise argument, he said, but it may just be in your head. You need language to be able to convey that argument to another mind, he told graduates while indicating the significance of literature.
“But most of all, you need hard work. You have to prepare your case well and if you have a sound argument and have found the exact ruling on the point, you do not need to argue. Just present the book before the judge and you will win,” he assured them.
“In this country, every social issue, economic issue and political issue ultimately ends up in a court of law,” he said.
Unless you have a well-rounded personality and knowledge about different disciplines, it will be difficult for you to understand the scope of the arguments, he cautioned.
The top judge urged them to keep themselves informed through books, magazine and newspapers.
Justice Khosa suggested a “house job” for lawyers so they can learn how to combine their academic knowledge with practical knowledge.