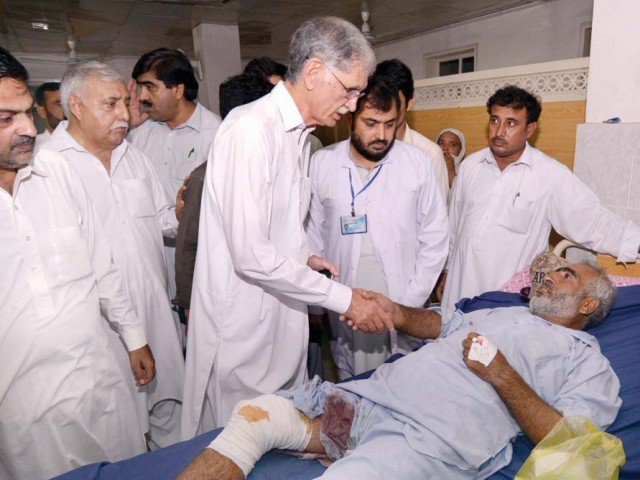 PESHAWAR: Chief Minister Khyber Pakhtunkuwa, Pervez Khattak Friday visited Khyber Teaching hospital and met with injured of the deadly terrorist attack on Agriculture Training Institute, claiming 12 lives and injuring 32 persons.
The Chief Minister went to different wards of hospital and met with injured of the attack. He enquired after health of all the injured and prayed for their early recovery.
Talking to media during the visit, Chief Minister paid salute to spirit of security forces who reacted very promptly and professionally in defeating the terrorists.
The response of security forces was very quick and effective, resulting in minimizing losses due to the attack, Pervez Khattak observed.
He said KP Police has become a regular professional force fully competent to meet any challenge from terrorists and anti state elements.
Chief Minister also disclosed that among the injured one is suspected to be member of terrorists. He said security forces are interrogating the suspected person.
It merits to mention here that three armed terrorists attacked Agriculture Training Institute on Friday morning at around 8:35 a.m.
The terrorists were wearing burqa (veil) to disguise themselves as women and arrived in a rickshaw (tri-wheeler) to enter into the premises of Institute.
Soon after entering, they started indiscriminate firing resulting in killing of 12 persons and injuring 32 others. Among the dead around seven are students, one watch man and others.
Security forces quickly responsded to the attack and killed all the terrorists including a facilitator, driver of the rickshaw, says Inspector General of Police (IGP) KP, Salaudin Mehsud.
The injured are admitted in different hospitals of the city for treatment. …APP