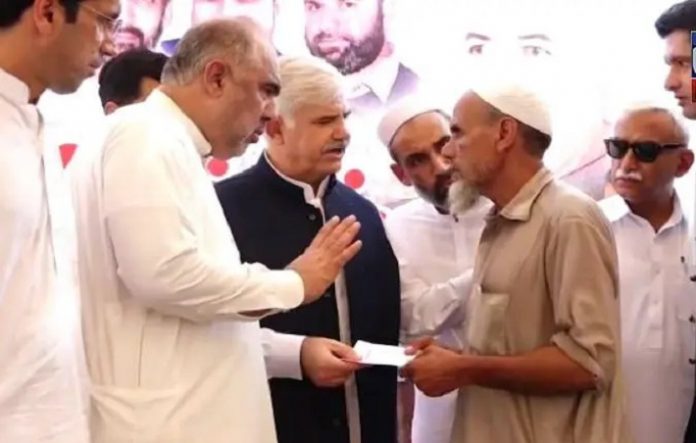 As per details, Chief Minister Mahmood Khan visited flood-affected areas of the Swabi where he has given a detailed briefing about the devastation of flood caused in BamKhel and other villages.

Announcing one billion special package, Chief Minister Mahmood Khan distributed Compensation cheques to the heirs of the flood victims in Swabi during his visit. The Minister further announced a total compensation of eight lakh for the heirs of those who died, four lakhs and one lakh and sixty thousand for those whose home were totally or partially during the flood.

On this occasion, Chief Minister Mahmood Khan announced that the amount of compensation for crops damaged by floods would be increased from 5 thousand to 10 thousand rupees per acre. He also announced that he would release 20 crore rupees for energy projects in the affected areas.

Chief Minister Mahmood Khan directed the officials of the irrigation department to estimate the losses and prepare a report.

It is pertinent to mention here that three people were killed and several others were wounded in heavy rain followed by flood in Swabi last week.

The rain and flood had also affected several areas of the district Tank. Chief Minister Mahmood Khan couple of days earlier had also visited to Thank and had distributed compensation cheques among the flood victims.