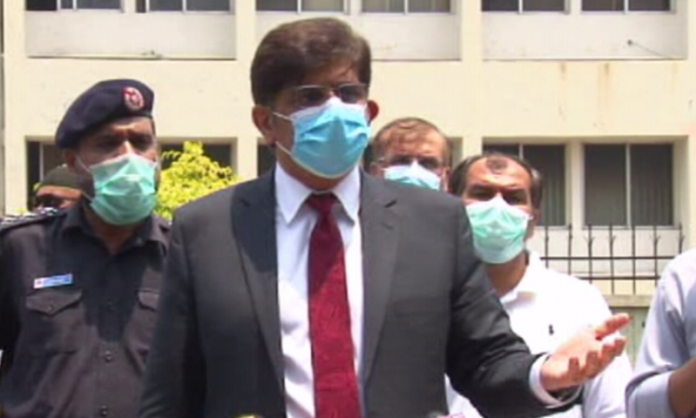 KARACHI: Sindh Chief Minister Murad Ali Shah on Wednesday criticized Minister for Shipping and Maritime Affairs Ali Haider Zaidi for “acting irresponsibly” by releasing what the minister claimed was the “original” joint investigation team (JIT) report on infamous Lyari gangster Uzair Jan Baloch.
Speaking to reporters after outside the National Accountability Bureau office in Islamabad after being questioned by the anti-graft watchdog, Shah asked how the PTI minister had obtained the alleged ‘original’ JIT report.
“I think he revealed someone came to his house on a motorcycle and gave him that report. If he had said that some responsible man gave it to him and now he was revealing it, it might have made sense. But this was not appropriate for a man who is a member of the National Assembly and a sensible person.”
A day earlier, Zaidi had said that the JIT comprised six members — one person each from the Special Branch and the Crime Investigation Department, from the Sindh government, as well as officials from the Intelligence Bureau, Rangers, Inter-Services Intelligence and MI, from the federal government. He claimed, however, that the two members from Sindh had not signed what he called was the original report, which he said included findings that Uzair Baloch was working at the behest of senior PPP leaders including co-chair Asif Ali Zardari.
Responding to the claim, Shah clarified that the JIT had seven members and not six, adding that the report submitted to the Sindh home department had all seven signatures. He further said that this was the same JIT report that was submitted to the Sindh High Court in a sealed envelope, was read by the honourable judges and then returned to the provincial government.
Shah further said JIT reports in “several forms were being circulated [on social media]” and since there is “no official seal” that is used for these documents, it might have confused many people.
Responding to a question, CM Shah said the provincial government’s legal department had advised them against making the reports public.
“We were under political pressure. It was in the courts. I talked to the attorney general and told him we would have to make these reports public because we were under political pressure.”
Shah pointed out that the report Zaidi presented to the media mentioned one of the six members as belonging to Crime Investigation Department (CID) which had been renamed to Counter-Terrorism Department (CTD) in 2015.
“I don’t know where he creates [these reports] from. I believe he is in some way trying to give favours to suspects [named in the JIT],” Shah claimed. “He acted very irresponsibly in a very important matter.”
“A person comes and gives it [to him] on motorcycle and [Zaidi] waves it in the National Assembly the next day. You saw how he could not defend himself in a programme yesterday. If he had told us before [how he obtained the report] then we might not have released it but laughed instead.”
Responding to a question, Shah said that it was up to the federal government to decide whether an inquiry would be conducted into the matter. He added that if Zaidi had harmed the case against Baloch, proceedings would be conducted according to the law.
He said that the claims made by Zaidi had not damaged the PPP.
“They made an attempt to malign [the PPP]. They showed pictures and videos of Baloch and his accomplices saying they were going to join the PPP.
“PPP is a democratic party, Zia tried to destroy it, he couldn’t. Musharraf tried to destroy it, he couldn’t. What can these people do?”