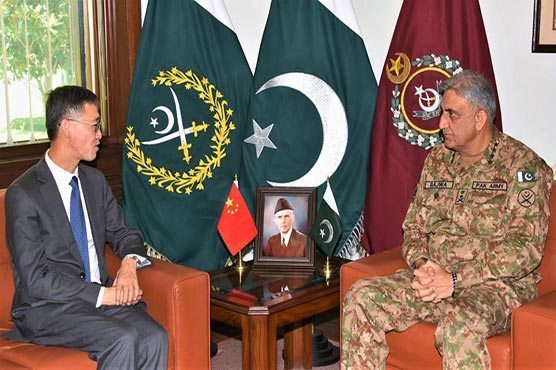 RAWALPINDI: Chinese ambassador Yao Jing called on Chief of Army Staff (COAS) General Qamar Javed Bajwa at the General Headquarters (GHQ) Rawalpindi.
According to the army’s public relations wing, the Inter-Services Public Relations (ISPR), the meeting discussed matters related to mutual interests between both the countries including regional matters.
Both the dignitaries agreed to further strengthen the bond between the two friendly countries.
Later, the Chinese envoy also met with the Chairman Joint Chiefs of Staff Committee (CJCSC) General Zubair Mahmood Hayat at the Joint Staff Headquarters.
According to ISPR press release, matters of bilateral interests including emerging security environment with particular reference to regional peace were discussed during the meeting
On April 18, Chinese Ambassador Yao Jing had said Pakistan and China are entering a ‘new stage of China-Pakistan Economic Corridor (CPEC)’ under which the areas of cooperation would be expanded.
He was addressing the participants during a book launching ceremony. Titled ‘CPEC – A Precursor to Regional Economic Growth and Stability’, the book is published by Strategic Vision Institute.
Yao Jing had said the upcoming visit of Prime Minister Imran Khan to China would take the relations between the two countries into a ‘new era’ of development and prosperity.