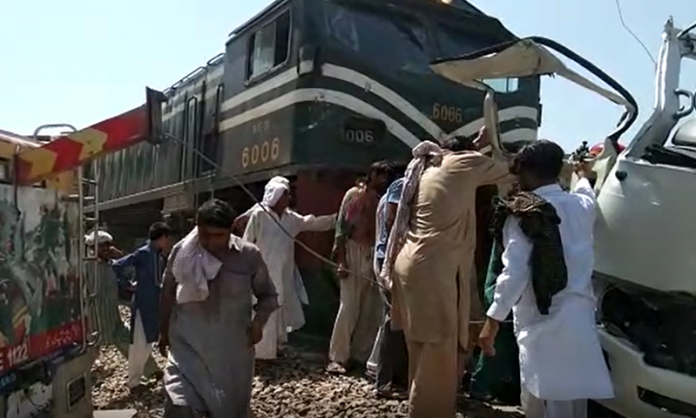 LAHORE: The railway authorities have released an initial investigation report of Sheikhupura train accident, declaring driver of the passenger coaster as responsible for the negligence which resulted killing of at least 20 people.
Earlier, a Lahore-bound train Shah Hussain Express rammed into a passenger coaster at a railway crossing near Farooq Abad railway station in Sheikhupura, killing at least 20 people, mainly Sikh pilgrims, and injuring several others.
The initial investigation report stated that the coaster’s driver was responsible of the deadly accident as he showed hurriedness to cross the railway line, whereas, no negligence came forth from the administration of the railway administration.
The initial report will be presented to the Federal Minister for Railways Sheikh Rasheed soon.
Rescue sources told media that most of the passengers travelling in the ill-fated coaster hit by Shah Hussain Express at the unmanned level crossing were Sikh Yatrees who were returning from Nankana Sahib.
In a statement post-accident, Federal Minister for Railways Sheikh Rasheed Ahmed said that unguarded railway crossings across the country are the main reason behind many such incidents.
The federal minister said that there are about 3000 railway crossings in the country that barely have a security guard stationed on them. He added that the creation of Karachi–Peshawar Railway Line (ML-1) will put all such railway crossing to bed and the concept will no longer continue to exist.
The minister further revealed that the unfortunate accident occurring earlier in the day was due to a lapse in judgment by the wagon driver who took an alternative route after he discovered that the railway crossing was crossed. The driver did not wait for the train to cross and tried crossing the tracks before it which resulted in the tragedy, said Sheikh Rasheed Ahmed.