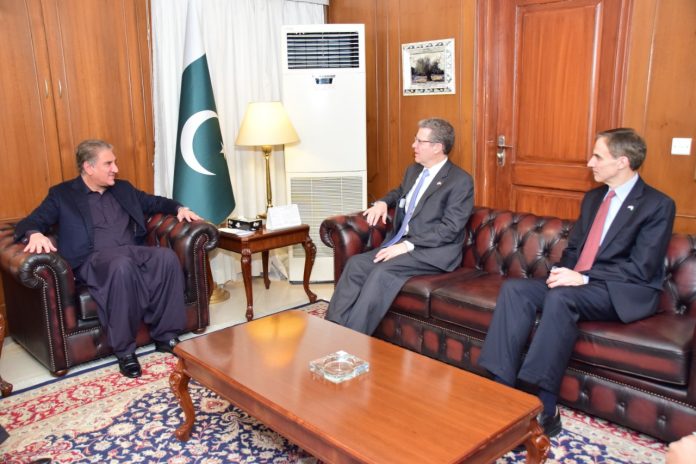 ISLAMABAD: United States Ambassador at Large for Religious Freedom, Ambassador Samuel Dale Brownback called on the Foreign Minister Shah Mahmood Qureshi in Islamabad on Friday.
Foreign Minister stated that Pakistan has always been a partner of international cooperation on the issues of religious freedom.
The Minister said that the Constitution of Pakistan protects rights of all minorities in Pakistan.
He added that Pakistan, as part to 7 out of 9 human rights treaties, is fully cognizant of its commitments to respect and protect minorities.
He also said that Pakistan led initiatives to combat religious intolerance and promote interfaith harmony have been endorsed by the UNGA and Human Rights Council.
Expressing concern over Pakistan’s designation as Country of Particular Concern by the US State Department, the Foreign Minister highlighted that the designation did not appear to be in sync with the ground reality. Pakistan is a multi-religious and pluralistic society where people of diverse faiths and denominations live together.
He said Pakistan has ensured constitutional and legal protection and freedom to all its citizens irrespective caste, creed or religious.
The two sides agreed to work together to devise a strategy to get Pakistan out of the list of Countries of Particular Concern.
The Foreign Minister said that Pakistan will designate a focal person to interact with Ambassador Brownback to implement the strategy.
The Foreign Minister said that higher judiciary of the country has made landmark decisions to protect the properties and places of worships of minorities.
He drew attention of Ambassador Brownback to the systematic persecution and suppression of fundamental rights including religious freedom of the Kashmiri people at the hands of Indian forces.
He urged Ambassador Brownback to take notice of egregious violations of human rights and religious freedom of minorities in India and the people in the Indian Occupied Kashmir.
Ambassador Brownback also met the Foreign Secretary Tehmina Janjua earlier in the day.