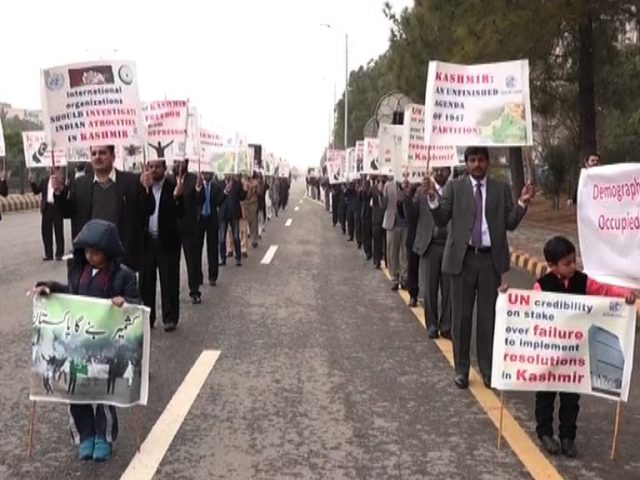 ISLAMABAD: The nation observed Kashmir Solidarity Day on Sunday with a pledge to seek a solution to Kashmir dispute according to UN resolutions and aspirations of Kashmiri people.
Mass rallies, symposia, peace walks conventions and meetings are being held across the country to draw world attention towards the plight of the oppressed Kashmiri people.
Jamaat-e-Islami and other parties took out rallies in Muzaffarabad, Islamabad, Multan Hyderabad, Karachi, Lahore and other cities.
In Lahore, Pakistan Muslim League (N) took out its main rally to show solidarity with Kashmiri people, from Alhamra Art Center to Faisal Chowk on the Mall today.
Jamaat-e-Islami Emir Siraj-ul-Haq addressed a large rally in Lahore, condemning India and paying tribute to the martyrs of Kashmir.
Railways Minister Khawaja Saad Rafique led the rally, which was also participated by the party leaders and workers in large numbers.
A rally ”Yakjehti Kasmir Karwan” was taken out from Zarghoon Road towards the Quetta Press Club.
In Mirpur, Azad Kashmir rallies were taken out and seminars and Kashmir Solidarity Conference are being held to express complete unity and solidarity with the people of Jammu & Kashmir in their just struggle for right to self determination.
Nation-wide one minute silence was observed at 10.00 a.m. to honour Kashmiri martyrs.
Members of the Kashmir Committee of the National Assembly will visit the office of the United Nations in Islamabad to present a memorandum calling on India to grant Kashmiris the right to self determination.
In Azad Kashmir, human chains was formed at Kohala and other points linking Pakistan and Azad Kashmir.
The main event of the day in Muzaffarabad will be the joint session of AJK Legislative Assembly and Azad Jammu and Kashmir Council.
Later, Prime Minister Azad Jammu and Kashmir Raja Farooq Haider Khan will lead a public rally which will be taken out from Chatter area in the afternoon.
In connection with the Kashmir Solidarity Day hundreds of people belonging to different segment of society formed a human chain at the Kohala bridge which like Muzaffarabad with Rawalpindi.
At 10 a.m. syron were played and one minute silence was observed by the participant to play homage to martyr of Kashmir freedom movement.
AJK Minister forest Sardar Mir Akbar Khan and other political leaders from AJK and KPK were present on the occasion.
In Muzaffarabad, students of different school held a rally to express solidarity with their brethren in Occupied Kashmir. …APP