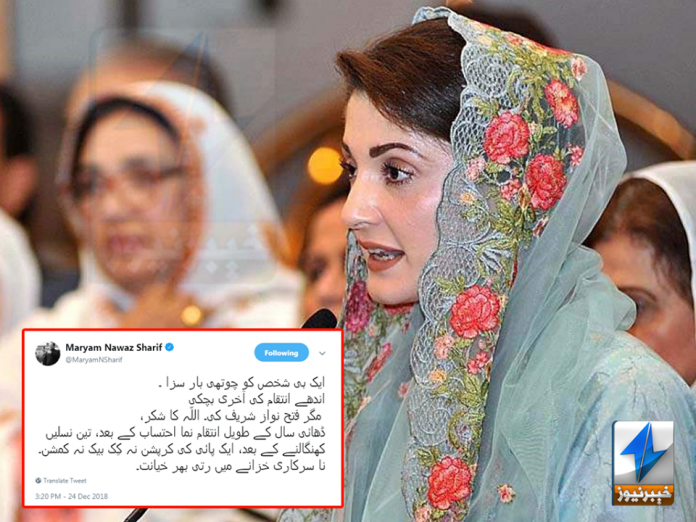 LAHORE: Former prime minister Nawaz Sharif’s daughter and Pakistan Muslim League-Nawaz (PML-N) leader Maryam Nawaz on Monday tweeted that the accountability court’s verdict in the Al-Azizia reference is the “last hiccup of blind revenge”.
Taking to Twitter shortly after the accountability court sentenced Nawaz to seven years in prison in Al-Azizia reference and acquitted him in the Flagship reference, Maryam said, “One man has been sentenced for the fourth time. This is the last hiccup of blind revenge.”
But success is of Nawaz Sharif, all praises to the Almighty. After a long accountability process spanning 2.5 years and three generations being probed, not a single penny’s worth corruption, kickbacks or corruption was proven. Even malpractice in the national exchequer could not be detected, she added.
“All the decisions were based on his [Nawaz] late father’s personal businesses. When they could not find anything wrong with them either, then sentences were handed based on assumptions. Today’s verdict is a testimony of Nawaz Sharif’s honesty and integrity,” Maryam stated.
A day earlier, Maryam returned to social media after a five-month hiatus and posted an emotional tweet about her parents.
Earlier today, Nawaz was sentenced to seven years in prison in Al-Azizia Steel Mills corruption reference and he was acquitted in the Flagship Investment reference.
In a short verdict announced today, the court said there was concrete evidence against the former premier in the Al-Azizia reference, and that he was unable to provide a money trail in the case.
There was not enough evidence to convict Nawaz in the Flagship reference, thus he has been acquitted, the decision read.
Nawaz was taken into custody from the court premises following the verdict, after which he is expected to be taken to jail.