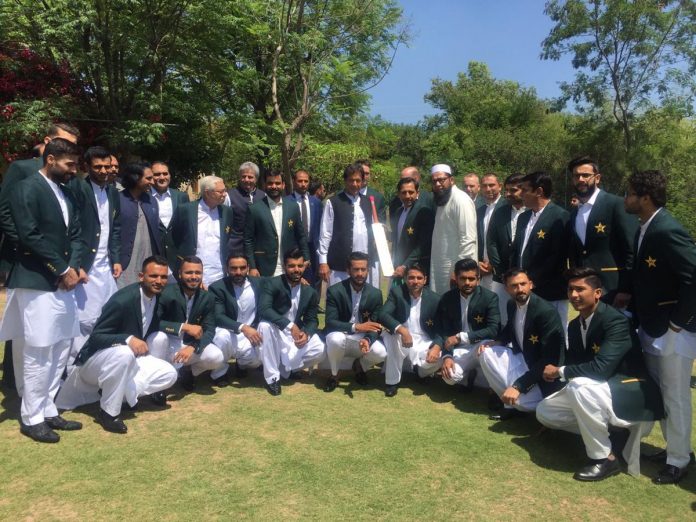 ISLAMABAD: Pakistan cricket team and management called on Prime Minister Imran Khan on Friday (today) ahead of the World Cup 2019.
The prime minister – also the 1992 World Cup winner – gave his expert opinion to the 15-member squad and tips to handle pressure in the mega event.
It is worth mentioning here that chief selector of Pakistan cricket team and legendary middle order batsman Inzamam-ul-Haq on Thursday (yesterday) announced the squad for forthcoming ICC World Cup 2019.
Addressing a press conference in Lahore on Thursday, he said that fast bowler Muhammad Aamir had been dropped from the World Cup squad.
The World Cup squad include Pakistan World Cup squad include, Fakhar Zaman, Imam-ul-Haq, Abid Ali, Babar Azam, Shoaib Malik, Muhammad Hafeez, Haris Sohail, Sarfraz Ahmed, Shadab Khan, Imad wasim, Faheem Ashraf, Hassan Ali, Shaheen Shah Afridi, Muhammad Hasnain and Junaid Khan.
Four other players selected for the World Cup are: Abid Ali, Imam-ul-Haq, 19-year-old Mohammad Hasnain and Shaheen Shah Afridi. Imam and Shaheen have featured in the ICC U19 Cricket World Cup 2014 and 2018, respectively.
The selectors have also named Asif Ali and Mohammad Amir for the England T20I and ODIs to be played in the lead up to the World Cup from 5-19 May.
Pakistan team will depart for London on April 23 to play one-off T20I and five ODIs against England ahead of the World Cup.
The 10-team World Cup is scheduled from May 30 to July 14 in England and Wales. Pakistan will open their campaign with the match against West Indies on May 31 at Nottingham.