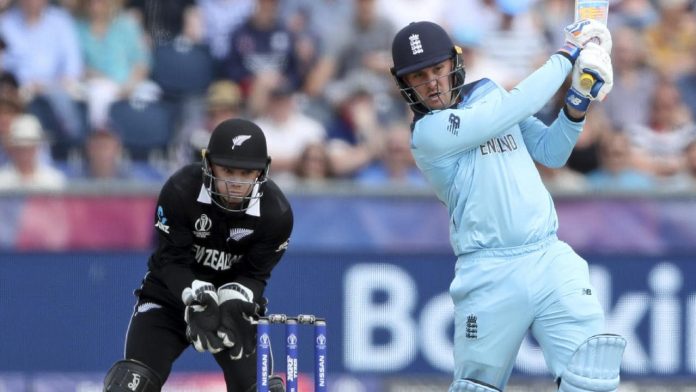 LORDS: No matter who wins between England and New Zealand, the one thing for certain is that it would be a historic occasion at Lords today.
One of them will get their hands to the World Cup trophy for the first time since the inception of the tournament in 1975 and the other will have to wait for 4 more years for their first World Cup title.
Hosts England were the pre-tournament hot favourites while New Zealand were also expected to make it to the last four as the performances from the two teams were right on the money.
England lost 3 matches in the group fixtures against Pakistan, Sri Lanka and Australia. New Zealand were phenomenal in the first half of the World Cup but lost the momentum in the latter half. They were tied on 11 points with Pakistan, but made it to the last four on the back of a better run rate.
England then avenged their group-stage defeat to Australia in a one-sided semi-final contest to enter the final for the 4th time, while the Blackcaps defeated India in a two-day long rain-interrupted semi-final clash.
England and New Zealand have faced each other 90 times thus far in an ODI format, from which the Kiwis have won on 43 occasions while England have tasted victory 41 times. 2 matches were tied between the two while 4 other games ended in no result.
Talking about just the World Cups, the two rivals have encountered each other 9 times in the showpiece event. The recent clash between them was in the league fixture of the world cup 2019 in Leeds, where England crushed New Zealand by 119 runs to get themselves a semi-finals berth.
1975 World Cup: England beat New Zealand by 80 runs
On the first edition of the World Cup, when the two teams met, Keith Fletcher remained unbeaten at 131 to take England to a total of 266 for 6. Chasing the target, New Zealand were bundled out for 186 as Tony Greig picked a four-fer.
1979 World Cup: England won by 9 runs
Mike Brearley and Graham Gooch batted with composure to score 53 and 71 respectively as England posted 221/8. Chasing the total, John Wright put up a great show with the bat to add 69 runs to the scoreboard. Mike Hendrick picked 3 wickets as England sealed the thriller to reach their first World Cup final.
1983 World Cup: England crush New Zealand by 106 runs
Chris Tavare (45) and David Gower (39) provided a solid base to England before Allan Lamb hammered his 3rd ODI hundred with able support from Mike Gatting (43). Chasing 323, New Zealand were reeling at 31/3. Martin Crowe played a valiant 97-run knock but failed to take New Zealand home as his side fell 106 runs short of a win.
1983 World Cup: New Zealand beat England by 2 wickets in a thriller
In the round-robin format, New Zealand faced England once again in the group fixtures and avenged their previous defeat of the tournament.
England batted first and Graeme Fowler and David Gower added 69 and 92 respectively. Lance Cairns and Richard Hadlee picked 3 wickets apiece to limit England to 234.
Geoff Howarth (60) and Jeremy Coney (66) batted exceptionally but Bob Willis, for once snatched the match with his 4-wicket haul. However, Coney managed to stick till the end as New Zealand won the game with just a ball to spare.
1992 World Cup: New Zealand win by 7 wickets
It was a clash between the two unbeaten side of the tournament. In the new format of the World Cup, team donned colored jerseys and the game was changed to 50-over format from 60 overs. England were spearheaded by Alec Stewart after regular captain Graham Gooch missed the game to a hamstring injury.
Graeme Hick (56), Stewart (41) and Robin Smith (38) took England to 200 for 8 in 50 overs. In New Zealand’ chase Andrew Jones was run out for 78 but Martin Crowe stood tall till the end on 73 as the Kiwis won the match woth 55 balls to spare.
1996 World Cup: New Zealand won by 11 runs
Opener Nathan Astle smashed a hundred as New Zealand posted 239 for 6. Alec Stewart and Graeme Hick build a good stand for the third wicket before the former departed for 34. A needless Hick run-out for 85 changed the course of the game as New Zealand eventually won the match by 11 runs.
2007 World Cup: New Zealand beat England by 6 wickets
After a fifty from Kevin Pietersen, England managed to get to a below-par score of 209. James Anderson and Liam Plunkett then reduced New Zealand to 19/3 but Scott Styris kept rooted at the crease with his unbeaten 87 to take New Zealand home with 54 balls to spare.
2015 World Cup: New Zealand win by 8 wickets
Tim Southee reduced England to 36 for 2 by getting openers Ian Bell and Moeen Ali. Joe Root scored 46 but England had no answers to Southee’s swing as England were limited to 123 in 33.2 overs. Southee finished with 7 wickets, his career-best and the best bowling figures ever recorded in a World Cup game. Chasing the paltry total, captain Brendon McCullum smashed 77 off just 25 balls as New Zealand registered a win in 12.2 overs.
2019 World Cup: England win by massive 119 runs
In their last meeting in the ongoing World Cup, England defeated New Zealand in a one-sided affair. After electing to bat, England openers Jonny Bairstow and Jason Roy built 123-run stand as the former smashed a hundred to guide his side to 305. In the chase, New Zealand openers once again produced a flop show. Tom Latham got a fifty but failed to get any support from others. Mark Wood picked 3 wickets as New Zealand were all-out for 186. …Agencies