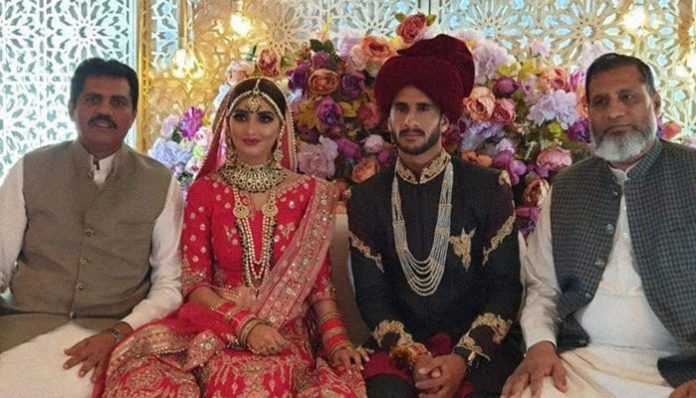 DUBAI: Pakistan’s Hasan Ali began a new chapter of his life on Tuesday as he tied the knot with Samia Arzoo. The cricketer was garbed in a gorgeous black sherwani, while his wife donned a red and gold dress.
The ceremony was held at a seven-star hotel, with Hasan’s close friend and teammate, Shadab Khan, as well as close friends and relatives in attendance. Middle Eastern and South Asian cuisine was served to the guests.
The happy couple’s nikkah was performed earlier in the day, following which they went for a pre-wedding photoshoot near the iconic Burj Khalifa in Dubai.
Samia — who hails from Hariana, India — and Hasan had met a year ago through a close friend in Dubai. In this regard, he said: “I spoke to my brother and sister-in-law after I met her.
“I told my brother that I wanted to marry her and the family had no issue,” he added.
Samia has studied engineering from England, lived with her parents in Dubai, and works for a private airline. She has some family members in New Delhi as well.
The newlywed’s mehndi on Monday was attended by Hasan’s close friend and teammate, Shadab Khan, who was seen dancing with the cricketer’s other friends.
According to Hasan, his valima, too, would be held in Dubai, with a reception planned back home.