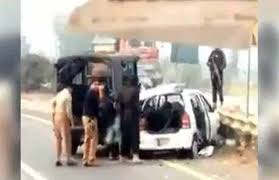 SAHIWAL: Apprehended Counter Terrorism Department (CTD) officials in the Sahiwal shootout case on Thursday denied firing shots at Khalil and members of his family who were travelling in a car driven by an alleged terrorist.
In their statement to the Joint Investigation Team (JIT) probing the incident, the CTD personnel revealed that neither did they open fire at the Sahiwal family nor did anyone give them directives to do so.
Responding to a question about how the passengers were killed, the policemen said they were shot dead by their associates travelling on a motorcycle. “We retaliated by opening fire at the terrorists.”
Khalil, a resident of Lahore’s Kot Lakhpat, along with his wife Nabeela and teenage daughter Areeba were killed in a shady encounter involving the CTD of Punjab Police on a highway in the Qadirabad area of Sahiwal district last week.
Earlier, on Jan 31, Sahiwal vicitm’s brother, Jalil, refused to appear before the JIT for the identification parade of CTD officials.
The identification parade was put off for the third time after the main complainant in the case didn’t turn up. The JIT will now inform the relevant judicial magistrate in this regard.
On Jan 30, Jalil had appeared before the JIT but refused to be part of the identification parade.
Accusing the JIT of destroying evidence in the case, Jalil had said, “How can the identification parade could be conducted until all the accused are not arrested.”
He had also said the police and JIT knew who the killers of the Sahiwal victims were. “The JIT is troubling eyewitnesses and destroying evidences in the case.”
Jalil had demanded to transfer the case to Lahore. “Why should we come to Sahiwal for the identification of the accused? We have demanded the constitution of a judicial commission.”