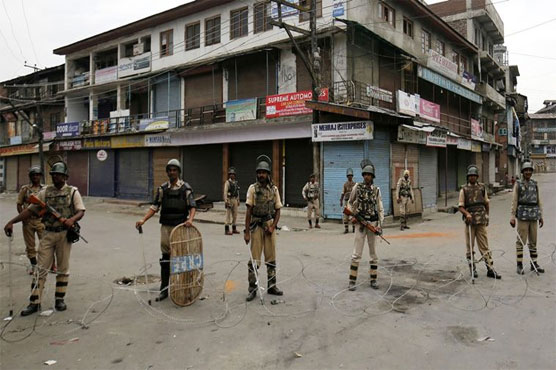 SRINAGAR: Communications ban continued in Indian occupied Kashmir for a fifth day on Friday, following the Indian government’s decision this week to abolish Article 370 of the Constitution which grants special status to the occupied valley.
According to Kashmir Media Service, over 500 political leaders and workers have been detained since India revoked the valley’s special status on Monday.
Hurriyat leaders including All Parties Hurriyat Conference Chairman Syed Ali Gilani and chairman of Hurriyat forum Mirwaiz Umar Farooq have been under house arrest or in jail.
Nearly, 560 such workers have been lodged in makeshift detention centres in Srinagar, Baramulla, Gurez and other areas, as jails and police stations of the valley were overcrowded with hundreds of Hurriyat leaders and activists in them.
On Sunday night, former chief ministers Mehbooba Mufti and Omar Abdullah — along with regional party leader Sajad Lone — were placed under house arrest.
Tens of thousands of Indian troops have enforced a strict curfew, which includes no internet or phone services and are allowing only limited movement on streets usually bustling with tourists flocking to the picturesque valley.
Residents have been confined to their houses due to stringent restrictions amid all the communication links of the territory with the outside world snapped by the authorities.
The Indian authorities imposed section 144 in Kargil district of Ladakh region after forceful demonstrations against India’s move to declare Ladakh a union territory. In response to India’s move, the All Parties Action Committee Kargil, an amalgam of all political and religious organisations of the district, in a memorandum to the Indian President demanded the restoration of the Article 370. …Agencies