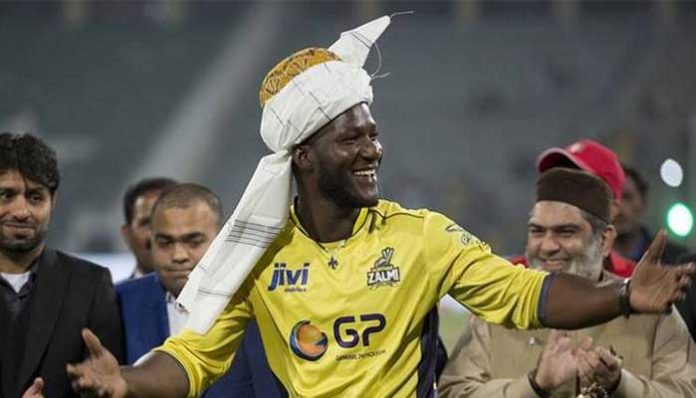 KARACHI: Peshawar Zalmi skipper, Darren Sammy will soon receive honorary citizenship of Pakistan.
Peshawar Zalmi owner Javed Afridi revealed that his team’s skipper Darren Sammy will soon get the honorary citizenship of Pakistan.
The Saint Lucian cricketer played international matches for West Indies.
He emerged as a celebrity in Pakistan after he started playing Pakistan Super League (PSL).
One of the international players, Sammy, accepted to play in Pakistan when the country came under pressure due to attack on Sri Lankan team.
He is currently in Pakistan to take part in PSL 5.
Javed Afridi revealed that an application for the citizenship of Sammy sent to the table of President Arif Alvi.
He also requested PCB Chairman Ehsan Mani to take up the matter with the president so the implementation could take place as soon as possible.
“We want honorary citizenship for Darren Sammy and an application in this regard is also lying pending before the President,” said Javed Afridi to Ehsan Mani.
He added that, “I request the PCB chairman to put in a good word for Sammy, so it can be approved.”
This is the first time that an international player going to have the citizenship of Pakistan.