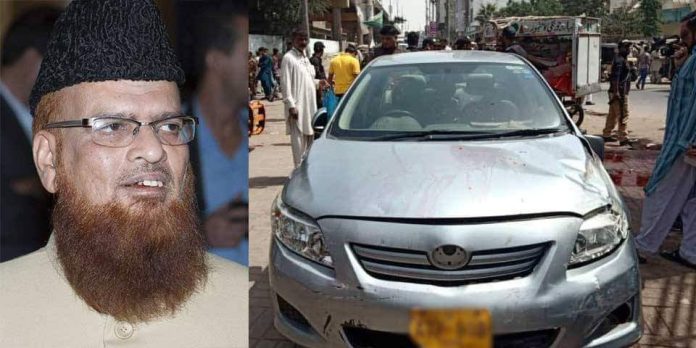 KARACHI: At least two people including Maulana Shahabullah were killed and two others injured when unknown miscreants targeted Darul Uloom Korangi’s two cars including one in which Mufti Taqi Usmani was onboard in separate localities of Karachi here on Friday.
In the first incident which took place near Neepa Chowrangi two people were killed in the remits of Aziz Bhatti Police Station.
Four gunmen on two motorcycles sprayed the car with bullets from both sides. The vehicle bearing number plate ATF 908 was registered in Darul Uloom Karachi’s name. The dead were identified as Maulana Shahbullah Khan and security guard Sanobar Khan.
Darul Uloom is one of the largest Islamic seminaries in Karachi that is run by Mufti Rafi Usmani and his brother and renowned Islamic scholar Mufti Taqi Usmani.
The second attack took place on Shahra-e-Faisal in which two people were injured, however Mufti Taqi Usmani remained unhurt in the attack. The second car was registered in the name of Mufti Taqi Usmani.
DIG East Amir Farooqui said Mufti Taqi Usmani is safe.
Rescue official said the injured were shifted to a hospital for treatment.
The police and Rangers have cordoned off the areas following the incidents.
Taking notice of the incident, Sindh Chief Minister Murad Ali Shah has sought report from the Inspector General Sindh Police.
Karachi has seen relative calm after decades of violence that claimed thousands of lives in the metropolis that is home to at least 20 million people.
The peace returned to commercial hub of the nation after police and the paramilitary Rangers launched crackdown against criminal elements in the city.